Spotlight of The Vineyard by Maria Duenas 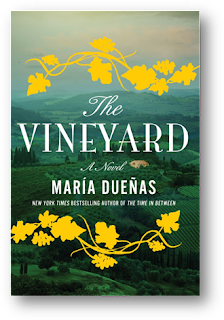 ALL INFORMATION IN THIS POST IS COURTESY OF MIRTH PENA OF SIMON & SCHUSTER/ATRIA BOOKS.

"Heart wrenching yet uplifting, this beautifully rendered story
will linger in readers' minds" - RT Book Reviews, four stars
**********
With the debut of her brilliant first novel, the New York Times bestseller The Time In Between (Atria; 2009), Dueñas was lauded for her descriptive and lyrical narrative and uniquely touching protagonists.  In a starred review, Publishers Weekly declared her “a writer to watch,” while El Mundo in her native Spain said, “Dueñas more than lives up to her title as one of the best contemporary authors today.”  It was critically and commercially acclaimed in the United States, and was also an international success, selling over two million copies worldwide and inspiring a popular Spanish television series (now available on Hulu and Netflix), known in the media as “the Spanish Downton Abbey.”  Her second novel, The Heart Has Its Reasons (Atria; 2012), was also well received and became an international bestseller.

María Dueñas is also a writer who has her finger on the pulse of society, with an innate talent for exploring the more personal and intimate issues in life—issues that no matter who we are and what we’ve accomplished—have affected many of us.

THE VINEYARD is a powerful story of courage in the face of adversity, and of a destiny forever altered by the force of passion.
**********
ABOUT THE STORY:

Mauro Larrea’s fortune, the result of years of hardship and toil, comes crashing down on the heels of a calamitous event. Swamped by debt and uncertainty, he gambles the last of his money in a daring play that wins him an abandoned house and a vineyard an ocean away.  Mauro travels to Andalusia de Jerez in Spainwith every intention of selling the property and returning to Mexico. That is, until he meets the unsettling Soledad Montalvo, the wife of a London wine merchant, who bursts into his life unannounced, determined to protect her family’s legacy. Before long, Larrea finds himself immersed in the rich culture of the sherry trade. As his feelings for Soledad ripen into a consuming passion, he seeks to restore the vineyard to its former glory.

From the turbulent young Mexican republic to flourishing Havana, and onward to the fertile vineyards of Jerez in the second half of the nineteenth century,María Dueñas’s new novel takes place on both sides of the Atlantic, the New World and the Old.  This story of family intrigue vividly conjures the noise and grit of silver mines, and the earthier lure of ancient vineyards and magnificent cities whose splendor has faded. Using the same resonant voice and skillful narrative style as she did in The Time In Between and The Heart Has Its Reasons, María Dueñas pours heart and soul into THE VINEYARD and creates a vibrant canvas that immerses readers in each locale, and offers a fascinating study in contrasts, contradictions…and second chances.
**********
ABOUT THE AUTHOR:

María Dueñas holds a PhD in English philology. After two decades dedicated to academics, she broke onto the literary scene in 2009 with the publication of the New York Times bestselling novel The Time In Between, followed by The Heart Has Its Reasons in 2012. Both novels became international bestsellers and have been translated into 35 languages. The television adaptation of The Time in Between earned critical and international acclaim. The Vineyard is her third novel and is being simultaneously published in Spanish as La Templanza.