Child of Eynhallow by Anne Kinsey 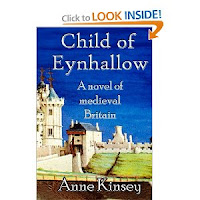 Being an outcast isn't pleasant.  Being an outcast in twelfth-century England is twice as bad.
Isabel Cole was an outcast from the beginning of her life and had to deal with many things alone.  She didn't know about her family's life before she was born, but the villagers had their ideas.

Isabel had to endure unpleasant half-brothers. She had to endure a father who never smiled except at his sons; and she had to endure life in a convent.  Isabel was an outstanding student at the convent and learned to read and to become a lady.  She  visited her village at times on her few hours of free time.


When Isabel was in the village, she always wondered why the woman labeled as a witch smiled at her whenever she saw her.  Isabel found out why she smiled at her....she was related to this woman. The woman was the sister of Isabel's grandmother, and her name was Alis.

One night after Isabel escaped from the convent and went to see Alis, Alis gave Isabel the details of their family history.  The story describing these women and how their difficult lives and their herbal cures, which were defined by the village people as witchcraft, was quite intriguing.  In fact, each of the book's characters, the men included, was interesting.


The way of thinking during the twelfth century is quite different in terms of religion, unmarried women, and specifically witchcraft.  Anne Kinsey takes the reader through the lives of Mara, Alis, Nan, and Isabel, and ends in the present with Isabel's life.  Learning about their complicated, different lives as twelfth-century women kept me turning the pages.

The book also kept my attention because of the time period, because it was set in Scotland and northern England, and of course because of the storyline.  I totally enjoyed the descriptions of the Scottish mainland and the islands.  I always enjoy reading about Medieval times and how people lived and worked.

Anne Kinsey has a great way of writing that draws you in.  She is very descriptive, and she weaves you into the story.  You feel as though you have put yourself in the scenes and also into the characters' hearts.  From her descriptions, you will take on the emotions of every character.

Her writing style will keep you interested and anxiously waiting to learn more about the family, their daily life, and how the generations all came about.  It is an enjoyable, distinctive read.  Don't miss out on this book. 5/5