Photo Source
************
Rick Summie of Caitlin Hamilton Marketing and Publicity LLC is celebrating the release of:

MURDER AT THE ESTATE SALE 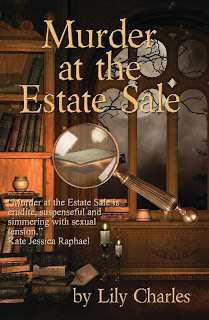 PRAISE FOR MURDER AT THE ESTATE SALE:

"...a charming pastiche of the age-old body-in-the-cellar mystery genre—one that’s full of hidden passageways, occult rituals, and, of course, amateur sleuthing....this book manages to rise above much of the competition, owing to its consistently jovial and easygoing narrative style, as well as its informative discussions of Renaissance sorcery. A fun, lightweight read for mystery fans, which will also keep occultists and bibliophiles happy.” —Kirkus Reviews

“Murder at the Estate Sale is erudite, suspenseful and simmering with sexual tension. Antiquarian booksellers Molly O'Donnell and Emma Clarke are lovable and believable sleuths. The book is an introduction to a fascinating world and a rip-roaring good time to read! I can't wait to see what Molly and Emma get into next.”
—Kate Jessica Raphael, author of Murder Under the Fig Tree and Murder Under the Bridge

“Lily Charles has written a charming debut mystery set in the world of antiquarian and collectible bookselling in the hub of the South in Atlanta, Georgia. Two women booksellers team up to solve the murder of a book thief, only to find themselves in the middle of a black magic cult. As in Jacqueline Winspear’s Maisie Dobbs Series, you’ll peek into the underbelly of the human desire for power and learn something new about bookselling along the way.” —Lynn Hesse, author of Another Kind of Hero and Well of Rage

“Murder at the Estate Sale, a charming adventure for lovers of books and bibliomysteries, is the debut of two engaging and fresh characters, Molly O’Donnell and Emma Clarke, both book sellers. Set in Atlanta, the protagonists take us on an exciting, educational and romantic ride through the antiquarian book scene.” —Trudy Nan Boyce, author of The Policeman’s Daughter, Old Bones, and Out of the Blues

“When I opened Murder at the Estate Sale, I expected to enter a familiar world of antiquarian booksellers, rare book fairs and estate sales, with a few dead bodies littering the bookshelves. That I did, but I also found a history of occult literature and a group of characters that make me wonder what my bookselling colleagues might be doing in the basement! There’s a twist around every corner and a nice love story developing as well.”—Lee Linn, bookseller, The Ridge Books, Calhoun, GA

"Lily Charles' Murder at the Estate Sale combines the bookish passion of A.S. Byatt's Possession, the occult history of Deborah Harkness' A Discovery of Witches, and the cozy mystery of Ellen Hart. Readers will love this peek behind the curtain of the rare book world and will cheer for the friendship and budding romance between likable amateur sleuths, Molly and Emma."—E.R. Anderson, bookseller, Charis Books & More, Decatur, GA


Molly O’Donnell is an antiquarian bookseller with specialties in several categories, including titles about the occult. She’s also the owner of two large, loyal, and lovable Russian wolfhounds and is possessed of a curiosity that leads to occasional recklessness.

Emma Clarke is a former academic, new to bookselling, who’s trying to gather her life together after a long but finally unsuccessful relationship. She likes her quiet life. She likes having no pets or obligations.

When Emma and Molly meet while waiting to enter an estate sale to search for the old, the rare, and the sell-able, what they find is a murder. Hearing a cry, Emma ignores a “Do Not Enter” sign and discovers book thief Buck Hubbell bashed in the head in a basement library. Molly soon follows and finds a slip of paper with a grave warning, written in ancient script. The paper has fallen from one of the books in this private part of the collection excluded from the sale. The page is creepy and hints at black arts, which neither lady condones, despite their intellectual interest in the subject.

Newly introduced, tentatively attracted to each other, and terrified, Molly and Emma form an uneasy alliance to reunite the ephemera with its original text—and to solve a murder.
Bibliophiles and mystery fans will relish this clever novel as well as champion this new pair of amateur sleuths who have the best intentions, the worst timing, big hearts, and significant smarts.
************
ABOUT THE AUTHOR: 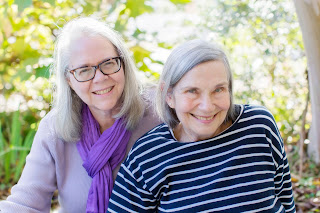 Lily Charles is the pen name of Charlene Ball and Libby Ware. MURDER AT THE ESTATE SALE is the first in their Molly and Emma Booksellers Series. Under the name Toadlily Books, they sell antiquarian and collectible books. Charlene and Libby married in 2016 and live about a mile from each other in Atlanta. Find them at lilycharles.com

Charlene Ball is the author of DARK LADY: A NOVEL OF EMILIA BASSANO LANYER (She Writes Press, 2017), winner of the Sarton Award from Story Circle. She has published short stories and articles in academic and literary journals. Until 2009, she worked as a college administrator and instructor.

I am partnering with Rick Summie of Caitlin Hamilton Marketing and Publicity LLC for this giveaway: