The Language of Flowers by Vanessa Diffenbaugh

Victoria knew she could identify flowers and what effect they would have on a person.  She could choose flowers and know what emotion they would evoke and what the person receiving the flowers needed.

Victoria had a talent, but she was a foster child moving from one home to the next and had to deal with this ordeal first......then she turned 18 and was turned out of the foster care system and on her own.  Where would she go and what would she do now?  After sleeping in the woods for some time, hunger and cold made her walk boldly into a flower shop and ask to help the florist.  This was the beginning of a great relationship between Victoria and her talent with flowers....it had instinctively been developed in her and was a natural gift.

Ohhhhhhhhhhhhhh....the book was absolutely wonderful and beautifully written.  I totally and completely LOVED it.

You could definitely connect with Victoria even though she was a mean, angry foster child until she met her loving foster mother, Elizabeth.  It was amazing how Victoria changed into someone who was in tune with feelings and something as delicate as flowers because of  Elizabeth.  Elizabeth also had a secret, and the mystery thrown in kept you wondering what had happened in the past.

The book became better with each turn of the page.  It was exceptional in terms of writing and storyline.  I enjoyed how smoothly the book went from Victoria's childhood to the present.

To me this book stood for unconditional love, for hardship, for talent, for disappointment, and for working for what you really want.

I can definitely see why it is being considered the publishing event of 2011......it is indescribably incredible.

Next to Love by Ellen Feldman 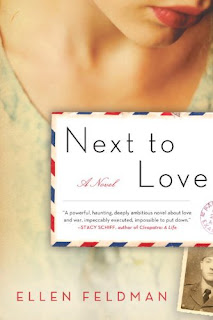 LOVED IT….
Men leaving, women hoping, both wanting to return to normal, but.......WW II was on the verge of beginning.
Millie, Grace, and Babe were the best of friends and endured the time while their husbands were gone.  They passed the time writing letters to them and waiting for letters in return.  Two weeks passed without any word from their husbands and that could only mean one thing.  When the Telegram from the War Department arrived, it confirmed their worst nightmare.
The book was nostalgic, poignant, and filled with emotions you definitely became a part of.   You will be able to follow the women through their daily lives.....one with her man who came back and two who had to carry on alone.  The author allows you to see what life was like family wise and economic wise during the post-war era.
I always enjoy historical fiction, and Next to Love won't disappoint you in terms of feeling as if you are with the characters as they suffer, remember, love, and continue their lives after the war.
My rating is a HUGE 5/5.  Feldman is an extraordinary, detailed writer….I hope you will enjoy the book as much as I did...it was wonderful.

"Sail on Silver Girl. Sail on by.  Your time has come to shine.  All your dreams are on their way.”  Page 341
Meredith Delinn certainly didn’t feel like any dreams were coming true after her husband was arrested for stealing millions from investors.
Being the wife of an investment thief definitely was not pleasant.  Freddy had cheated investors out of millions, was finally caught, and made his family's life miserable.  He wouldn't talk to authorities about anything and wouldn't tell them that his wife and sons had nothing to do with his swindling of investors out of their money.  Meredith and her two sons were also under investigation.

So…..as Freddy was hauled off to jail for 150 years, Meredith left town with her best friend Connie.  They were staying at Connie's beach house in Nantucket....beautiful Nantucket where Meredith had to remain incognito since many investors lived there.
Despite her disguise, someone recognized Meredith and small assaults on Connie’s property started occurring.   They were blaming Meredith for Freddy’s thievery.
SILVER GIRL went from past to present describing the story behind each character and how they became the person they were today.   Many themes presented themselves…..love, health issues, social issues, family and friendship connections, and most evident.....GREED, BETRAYAL, and DECEIT.   All three were ruining  many lives including Meredith’s.
I thoroughly enjoyed the book and became involved with the characters.   The characters were made of a great circle of friends tangled in situations since high school.  As you read the book, you will start to ask yourself:  Do I really know the people I have in my life relationships?  Well….hopefully we do, but the book definitely will make you question yourself.
The book title plays a major role in solving the mystery that was also woven into the book.
I am giving Silver Girl an outstanding 5/5....Ms. Hilderbrand kept my interest from the first to the very last page. 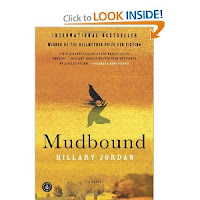 Laura was 30  years old, a teacher, and unmarried....not good according to Mississippi's social crowd.  A woman her age should be married and have children.  She was embarrassed about it, and her mother didn't help with her comments.

One day, though, Henry came to dinner and "saved" Laura from all the embarrassment.  He asked her to marry him.  She willing did and was happy.  The happiness waned when Henry bought a farm to fulfill his lifelong dream of planting cotton along with a farmhouse with no running water, no plumbing, or electricity.  Laura's life had hardships she was not used to, but she endured.

The book was compelling...the chapters were divided into the description of and the tales of the main characters' lives, past and present.  Mudbound was a portrayal of what life was like in Mississippi in the 1940's during and after WWII...the racial prejudices, the country re-building after the men came back from the war, the social issues, and the everyday life of Southern families, both black and white.
The author's style is outstanding....you won't want to put the book down.  The plot's tension and ultimate horror along with the characters will keep coming back to you even after you turn the last page.  5/5

The Card by Jim Devitt

Winning an essay contest definitely turned out to be excellent for Van or so he thought.  His prize was the opportunity to be a bat boy in the dugout of a major league baseball team and rub shoulders with all the big names.  His dad was thrilled, and so was he.  On his first day with the team, his dad gave him a special baseball card that he described as magic. But.....was the card really magic or was it bad news?
Bad news happened not too long after the card appeared, and what was to be magic turned out to be something Van wished he had not even heard of.   What would have been the reason he won the contest in the first place, and what was so important about a Moe Berg baseball card to cause all this trouble?  Did either have anything to do with the things starting to happen in his life?

Baseball fans will definitely enjoy the book because of the details about the behind-the-scenes activities that happen in a locker room of a baseball team.  Mystery fans will enjoy the book as well....the ending was filled with action.  :)

I enjoyed the book....it is a Young Adult read.  It is fast moving, and the added interest of the mysterious men in black suits keeps you going.  The author had good development of the plot and the characters and definitely had you guessing until the end.  5/5