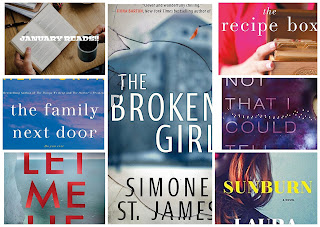 First time doing this - saw the idea on other blogs and on Facebook.

I read all of these books in January.

Review for these and other books will be in February and March.

My FAVORITE book of January was THE RECIPE BOX.

Have you read any of these books?

Next Year In Havana - Sneak Peek

*************
All information in this post is courtesy of Roxanne Jones of Penguin Random House.

See the info below as well as a short excerpt from the book.

In 1958, nineteen-year-old Elisa is the daughter of a sugar baron and member of Cuba’s high society where she is largely sheltered from the country’s growing political unrest—until she finds herself involved in a clandestine affair with an impassioned revolutionary that changes the course of her life.

More than fifty years later, her granddaughter, Marisol, returns to the country to fulfill Elisa’s last wish to scatter her ashes in the country of her birth. Once in Havana, Marisol soon follows in her grandmother’s footsteps when she finds herself attracted to a man with secrets of his own.

“Quiet.” I nudge her forward, my gaze darting around the departure area of Rancho-Boyeros Airport to see if anyone has overheard her question.We stand in a row, the famous—or infamous, depending on who you ask—Perez sisters. Isabel leads the way, the eldest of the group.

She doesn’t speak, her gaze trained on her fiancé, Alberto.His face is pale as he watches us, as we march out of the city we once brought to its knees. Beatriz is next. When she walks, the hem of her finest dress swinging against her calves, the pale blue fabric adorned with lace, it’s as though the entire airport holds its collective breath. She’s the beauty in the family and she knows it. I trail behind her, the knees beneath my skirts quivering, each step a weighty effort.

And then there’s Maria, the last of the sugar queens. At thirteen, Maria’s too young to understand the need to keep her voice low, is able to disregard the soldiers standing in green uniforms, guns slung over their shoulders and perched in their eager hands.

She knows the danger those uniforms bring, but not as well as the rest of us do. We haven’t been able to remove the grief that has swept our family in its unrelenting curl, but we’ve done our best to shield her from the barbarity we’ve endured.

She hasn’t heard the cries of the prisoners held in cages like animals in La Cabaña, the prison now run by that Argentine monster.

She hasn’t watched Cuban blood spill on the ground.

When I was younger, I begged my grandmother to tell me about Cuba. It was a mythical island, contained in my heart, entirely drawn from the version of Cuba she created in exile in Miami and the stories she shared with me. I was caught between two lands—two iterations of myself—the one I inhabited in my body and the one I lived in my dreams.

We’d sit in the living room of my grandparents’ sprawling house in Coral Gables, and she’d show me old photos that had been smuggled out of the country by intrepid family members, weaving tales about her life in Havana, the adventures of her siblings, painting a portrait of a land that existed in my imagination.

Her stories smelled of gardenias and jasmine, tasted of plantains and mamey, and always, the sound of her old record player. Each time she’d finish her tale she’d smile and promise I would see it myself one day, that we’d return in grand style, reopening her family’s seaside estate in Varadero and the elegant home that took up nearly the entire block of a tree-lined street in Havana.
When Fidel dies, we’ll return. You’ll see.

And finally, after nearly sixty years of keeping Cubans in suspense, of false alarms and hoaxes, he did die, outlasting my grandmother by mere months. The night he died, my family opened a bottle of champagne my great-grandfather had bought nearly sixty years ago for such an occasion, toasting Castro’s demise in our inimitable fashion.

The champagne, sadly, like Fidel himself, was past its prime, but we partied on Calle Ocho in Miami until the sun rose, and still—Still we remain.
******************
STOP BACK ON FEBRUARY 14 for a REVIEW and GIVEAWAY OF NEXT YEAR IN HAVANA!!
SEE YOU THEN!!

To celebrate the release of the paperback copy of:

Katie Bassel of St. Martin's has asked that I re-post my review so you can see that you will want to read this touching book by Sally Hepworth.
************
And...don't forget about Ms. Hepworth's newest release: THE FAMILY NEXT DOOR - publication date is March 6, 2018, and my blog review will be on March 13.

A mother's love is constant no matter what, and Alice definitely has a mother's never-ending love for her daughter Zoe.

Alice and Zoe are close and even closer than a mother and daughter normally are because Alice does not have a husband or any family, and obviously Zoe has no father.

Zoe ​along with the absence of family and friends ​has a social anxiety disorder​ that causes more worry for Alice and deeply affects Zoe.  When Alice finds out she has ovarian cancer, the exact cancer that caused her mother's death, her worry about Zoe is even more stressful.
We follow Alice and Zoe as they strugglethrough the battle of cancer treatments and resolving Zoe's anxiety issues.
During the treatment of her cancer, A​lice makes friends with her social worker, Sonja, and with her nurse, Kate, who also have problems of their own.

The subject matter of THE MOTHER'S PROMISE was a bit of a downer because of the cancer as well as other social problems, but it also was wonderful because of the development of friendships and the concern the characters had for each other.

Alice, Zoe, Kate, and Sonja were warm characters that worked well together, supported each other, and were perfectly portrayed.

THE MOTHER’S PROMISE was beautifully written and pulled you into the story and the lives of the characters as the difficult situations and life issues were addressed.  You can't help but become attached to Zoe and all the characters and cry along with them as the situations escalate.

Ms. Hepworth will again take women’s fiction fans on an emotional ride of real life situations and real emotions.
Get out the tissue box as you deal with the characters’ feelings and make them your own.

Going to say this is her best yet!!

SISTERS LIKE US by Susan Mallery - Review is in the book's title - finished November 30. 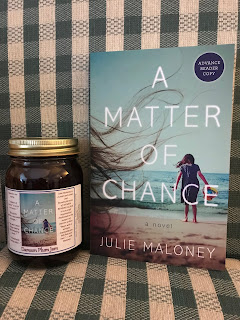