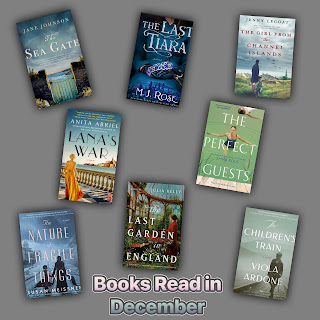 I read so many FAB books in December.

They will be reviewed in January and February.

How was your month?

My Favorite November and December 2020 Reads 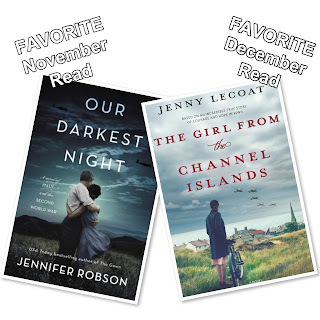 OUR DARKEST NIGHT - REVIEW WILL BE ON JANUARY 6

THE GIRL FROM THE CHANNEL ISLAND - REVIEW WILL BE ON FEBRUARY 2.

Petie had no luck.

She was put in a juvenile detention center for something she didn't do because she had been part of a group that was arrested.

We meet her as the story goes from present day back to her release from the detention center and to a new, promising job in Alaska.  She goes from sunny California to frigid Alaska for a job that sounded perfect.

But...is her job with Donald White really the perfect job?

I didn't trust Donald.  He has a house and a car in someone else's name and oodles of money, antiques, and investments.

The writing style in WRONG ALIBI pulled me in, and the storyline was excellent and different.

This book is truly one you don’t want to miss because it touched so many emotions and will have you wondering how you would handle the situations Petie had to endure.

It will also have you asking yourself if you really can trust the people in your life no matter who they are.

I would call it a thriller with some tense moments that had me on edge, but I would also call it a thoughtful read.  5/5

Her fifty-eight books have been called "scary, sexy, and smartly written" by Booklist and, much to her mother's delight, Dodd was once a clue in the Los Angeles Times crossword puzzle.

A teacher not showing up for the day?

Where could he be?

Aaron's wife Lila said he was gone when she woke up, but that is normal.

Lila said she had no idea where he could be, but Lila doesn't always tell the truth, and we know that Aaron was very controlling to the point of being abusive.

Lila had also found something on his phone that infuriated her, that he denied, and that caused a huge fight.

A nosey neighbor comes on the scene, and the school principal and a fellow teacher had called the police without Lila's knowledge.

Lila is a former attorney and knows how to stay cool, even though she isn't cool on the inside...she wonders where Aaron is when she knows he couldn't have gone anywhere.

When a note written on an index card is stuck in the sliding back door, its indication scares Lila because perhaps things didn't go as planned.

Who is Lila besides Aaron's wife?  Will the police find out?  And more importantly who is Aaron?

PRETTY LITTLE WIFE takes us through the investigation as tension mounts and Lila gets more nervous because she keeps getting notes but doesn't know who they are from.  She is hoping they aren't from Aaron.

I kept thinking it had to be Lila who made Aaron disappear, but then someone else pops up.

It is difficult to figure out what happened to him.

Will you figure out where Aaron is and how he got there?  This book is a guessing game until the very end.

There are some nice surprises.

THE NATURE OF FRAGILE THINGS by Susan Meissner - review will be on February 3 - finished on December 23.

************
OUR DARKEST NIGHT by Jennifer Robson - review will be on January 6 - finished on December 2.
A beautifully written, well-researched book.
Do not miss reading it.

THE WIFE UPSTAIRS by Rachel Hawkins - review will be on January 5, 2021 - finished on November 21.
Do NOT miss this one.

THE LAST TO SEE HER by Courtney Evan Tate - review is in the book's title.
Don't pass up this one.

THE PARIS LIBRARY by Janet Skeslien Charles - review will be on February 9, 2021 .

EVERY LAST FEAR by Alex Finley - review will be on March 4.