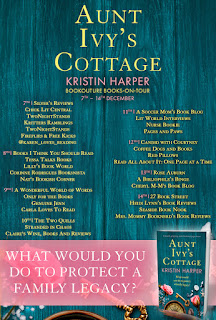 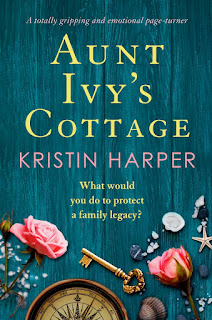 The description of the interior made me want to see it in person.

We meet Aunt Ivy, Aunt Sophie, Zoey, Mark, and Gabi.  Aunt Sophie had just passed, Aunt Ivy still lived in the cottage, Zoey was there because she lost her job and was taking care of Aunt Sophie.

Mark was there because he was selfish and wanted to see what he could do about getting Aunt Ivy’s house and use it as an investment.

Gabi was there because her father needed someone to take care of her since he was in an alcohol rehabilitation center.

I liked all of the characters - well all except Mark - as we learn about their life and loyalty to family. Mark wasn’t loyal.  Mark was only out to get what he could from the family and kept looking for something in the house.

There must be some secret in the family's past.

When Zoey finds something out, she knows it must be what Mark has been worried about anyone finding out.

AUNT IVY’S COTTAGE is a sweet read that will warm your heart because of the lovable characters and how they put family first.

If you need an uplifting read, this book will be perfect.

And look at that adorable cover.  5/5

This book was given to me for a tour by the publisher via NetGalley in exchange for an honest review. 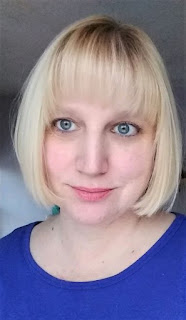 Ever since she was a young girl, there were few things Kristin Harper liked more than creative writing and spending time on Cape Cod, Massachusetts, with her family. Eventually (after a succession of jobs that bored her to tears), she found a way to combine those two passions by becoming a women’s fiction author whose stories occur in oceanside settings. While Kristin doesn’t live on the Cape year-round, she escapes to the beach whenever she can.
https://www.kristinharperauthor.com/
https://twitter.com/KHarperAuthor
Purchase links:
Amazon: https://bit.ly/31dWybr
Apple: https://apple.co/3dtbHL2
Kobo: https://bit.ly/2GUQGx5
Google: https://bit.ly/357nOK5