The Patriot Paradox by William Esmont 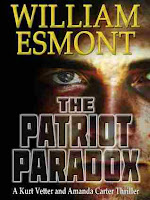 Two brothers….dangerous jobs….tragedies.
Kurt and Mike Vetter both were employed in dangerous jobs...Mike knew something was in the works and mailed secret information to his brother's house so it wouldn't be found in his home.  When Kurt opened the package and scanned the disk, he knew he had to find out what this classified information meant, and he left for London to try to find out.   When he landed in London, so did the "enemy."  Kurt was being trailed, but didn't know it.
Kurt had to find Amanda, the only contact he thought he could trust.  Once he found her, hopefully things would be cleared up, and she could find what secret mission was being  planned.   Meanwhile, Amanda's friend Nigel was decoding the disk, and from 2,000 miles away in the USA, Jack Carson and his team were planning to take care of Nigel.
There was something big going on, but it wasn't fully clear to Kurt or Amanda what it was, but Jack definitely knew.  As Nigel's computer decoded the information, he was becoming more upset.  "The data was incomplete, but this much was clear:  it was real and it was in motion." Page 116.  Something deadly was being planned.
Did the plan get carried out or was it stopped?  If you like on-the-edge-of-your-seat action, you will love Patriot Paradox....modern-day espionage.  5.5