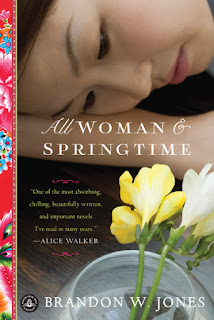 
These words make up the life of Il-sun and Gi.  Il-sun was wealthy at one time, but the death of her parents left her with no songbun and no status.  Gi was poor from birth and her family was accused by the government of not being loyal to the Great Leader and put into prison.  Both girls ended up in an orphanage and worked in a sewing factory.  When a slick trafficker deceives Il-sun, she and Gi end up in South Korea and are put into the sex trade.  These two girls, not even twenty years old, move from one horror to another.......their difficult life of fearing their government to the fear and lies of their captors.

Despite the book's gritty topic, it was quite interesting but heartbreaking to learn about the life of the citizens of North and South Korea and how the government had each citizen fearing for his/her life on a daily basis if they didn't work and devote themselves for the Great Leader.  The result of the harsh government and brainwashing caused illegal activities and even harsher circumstances for unknowing, innocent young women. The unethical men who took advantage and had control over Il-sun and Gi and other women were despicable.  You will feel the shame and hopelessness of these women enslaved in this type of life.  You will hate Mr. Choy and feel the pain of these girls.

The author did an excellent job with scene description, with character development, and with portraying the feelings of the characters.  There are some graphic parts dealing with the acts performed in the sex trade, but this book is an excellent representation of life as it was for citizens and these girls.  More can't be said without giving away the entire story.  If you liked Memoirs of a Geisha, you will like this book.

I can't say I liked it, and I can't say I didn't.  It was horrible reading the descriptions of the girls' lives who were in Mr. Choy's "camp" and where they were after that, but the history of North and South Korea was fascinating.  It is difficult to believe this type of activity goes on.  The ending was redeeming...give it a try.  4/5


I received this book from the publisher free of charge and without compensation in return for an honest review.