A Warm Welcome
To
Joyce Strand 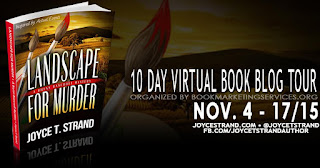 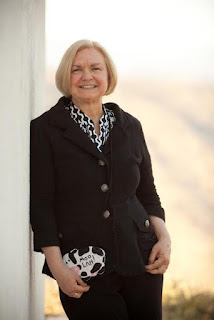 Mystery author Joyce T. Strand, much like her fictional character, Jillian Hillcrest, served as head of corporate communications at several biotech and high-tech companies in Silicon Valley for more than 25 years. Unlike Jillian, however, she did not encounter murder. Rather, she focused on publicizing her companies and their products. She is the author of the Jillian Hillcrest mysteries ON MESSAGE, OPEN MEETINGS, and FAIR DISCLOSURE and the Brynn Bancroft mystery HILLTOP SUNSET. Strand received her Ph.D. from The George Washington University, Washington, D.C. and her B.A. from Dickinson College, Carlisle, PA. She currently lives in Southern California with her two cats, a collection of cow statuary and art, and her muse, the roadrunner.

About Landscape for Murder: 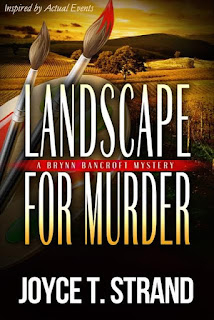 A friend’s murder. An unconnected cast of suspects, including the victim’s missing adult daughter. As if that wasn’t enough, Brynn Bancroft’s winery has been broken into. Can she deal with her co-owner ex and help the police find her friend’s murder so she can finally overcome her own troubled past and enjoy family life with her teenage ward?

Look at this AWESOME giveaway. 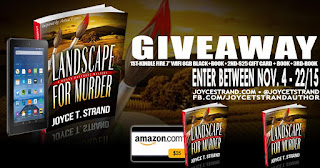 MS. STRAND WILL CHOOSE THE WINNER THROUGH RAFFLECOPTER.

3rd Prize: ebook or paperback copy of Landscape for Murder

How Ms. Strand Gets a Whodunit Started:


Conceiving a Whodunit
Inspired by the News and the Mundane
By Joyce T. Strand

“The best time to plan a book is while you’re doing the dishes.”-Agatha Christie

Yes, indeed. Ideas for my plots and traits for my characters occur during such mundane events as hassling household chores or taking car trips. The mind goes on curious journeys all by itself ignoring the tasks at hand.

But inspiration doesn’t begin or end with the mundane.

For my whodunits I search the news for crimes that might occur in my characters’ lives. For the Jillian Hillcrest series, I looked for murders that a public relations executive in Silicon Valley might encounter. For the Brynn Bancroft series, I researched possible crimes that would occur in the Napa/Sonoma wine region.

I then fictionalize the crimes to suit my plot and characters, but each of the crimes contains a kernel of real life.

My newest book, Landscape for Murder, involves burglaries of cases of wine, very much in the news. Also one of the characters is lightly based on a crime boss in San Francisco.

However, I approach my historical mysteries in a different manner by basing them on a real person, such as a California Superior Court Judge in THE JUDGE’S STORY; and a female reporter in the early 1900s for my still-to-be-written next book. My fictional Judge is based on the grandfather of a friend whose memoir inspired my character.

For my next story, I became excited about an early 20th century female reporter when I was visiting a museum where the description of a noted figure mentioned she’d gotten her start as a reporter. Further research on the subject of the history of women in journalism has proven fascinating. When I use the approach and mores of a real person, I build the mystery and back story around the character.

Nonetheless whether I start with a real crime or a real person, I proceed to develop the plot by integrating the elements of a mystery.  That’s where inspiration from mundane tasks most occurs—probably due to my writing process.

Typically I start writing a new story when I have done enough research to know the opening scene, the key characters (I usually write short biographies on each of them), the crime, and the conclusion. That leaves a significant amount of writing in between. And that’s where I most value those “thinkless” tasks and use them as focused time to inspire the scenes that advance the plot, create red herrings, build suspense, and show off the characters.

I target my writing time by number of words, rather than time spent. Depending on my deadlines, I set a goal of at least 3,000 to 5,000 words a day. If it takes me eight hours, then that’s what it takes. Sometimes, if I’ve done enough mundane tasks and have clearly thought-out scenes, I can easily write more than 5,000 in eight hours. However, I don’t over-step my goals because then what will I write about the next day? Momentum is helpful, and if I know exactly what I’m going to write that helps move it along.

No matter where the inspiration originates, my day is full of idea after idea for stories. Perhaps that’s a comment on the rate of crime in the news media. Regardless, inspiration for my whodunits arrives in full buckets!