Review and Giveaway of In Another Life by Julie Christine Johnson

Is Lia coming back to her roots?

Is Lia coming back to do research?

Is Lia coming back to France to try to heal her broken heart and find out more about how her husband died?

Is Lia coming back to find secrets she didn't know about people she trusted and people she shouldn't trust?

Lia Carrer probably came back to Languedoc because of all of those reasons and wasn't aware why she felt the need to return. She did know that being with her friend from college and her friend's family in beautiful, laid back Southern France was comforting.

A few of the people she found and things she saw were not comforting and hard to believe, though.

Could a few of these people have been reincarnated from 1208?

IN ANOTHER LIFE pulls you in with the detailed descriptions of the landscape and the beauty of Southern France and its vineyards.

We learn some history and bask in the love Lia finds as well as marvel at what Lia finds out about a centuries-old murder and her husband's death.

I am not sure if I can call this book historical fiction, women's fiction, or paranormal which I normally do not read. I am going to go with all three.  I am not familiar with the historical part, but it was interesting to learn about this event.

The cover is gorgeous. the story line is good but confusing at times, and Ms. Johnson's writing flows beautifully and is very detailed. It is a marvelous debut novel in all aspects.

IN ANOTHER LIFE has love, mystery, murder, and history all rolled into one.

The blending of the two time periods and especially the book's ending is a bit chilling, but oh so good.  4/5

Giveaway is at the end of this post...best of luck. 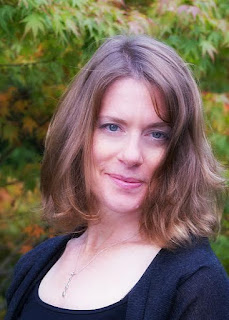 Julie Christine Johnson’s short stories and essays have appeared in several journals, including Mud Season Review; Cirque: A Literary Journal of the North Pacific Rim; Cobalt, and the anthologies Stories for Sendai; Up, Do: Flash Fiction by Women Writers; and Three Minus One: Stories of Love and Loss. She holds undergraduate degrees in French and Psychology and a Master’s in International Affairs.

Her second novel, The Crows Of Beara, a finalist in the Siskiyou Prize for New Environmental Literature, has sold to Ashland Creek Press for publication in fall 2017. In this work of women's fiction, a struggling American PR executive and an enigmatic Irish artist face off over the development of a copper mine in rural Ireland, finding love and redemption amid the rugged, mystical land.

A runner, hiker, and wine geek, Julie makes her home on the Olympic Peninsula of northwest Washington State with her husband. In Another Life is her first novel.

“Delicate and haunting, romantic and mystical, IN ANOTHER LIFE is a novel with an extraordinary sense of place. Fans swept away by Diana Gabaldon’s 18th-century Scotland will want to explore Julie Christine Johnson’s 13th-century Languedoc.”

“In this lovely novel, Johnson shows us the redemptive power of love and second chances through the ages. Evocative of Outlander, In Another Life is a thrilling combination of romance, adventure, and history.”

— Margaret Dilloway, author of Sisters Of Heart And Snow and How To Be An American Housewife

“Johnson’s heartbroken researcher wends through the lush landscape and historical religious intrigue of southern France seeking the distraction of arcane fact-but instead, like the reader, is transformed by the moving echo of emotional truth. An imaginative, unforgettable tale.”