Spotlight and Giveaway of The Middle Sister 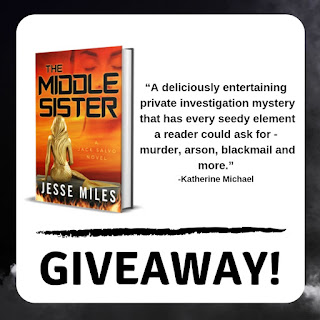 Information in this post is courtesy of Katie Schnack of Smith Publicity.
************
Not everything is sunny in Los Angeles…
NEW DETECTIVE NOVEL BY AUTHOR JESSE MILES GIVES READERS AN INSIDE LOOK INTO THE DARKER SIDE OF LOS ANGELES.
The Middle Sister not only takes readers on a page-turning adventure that keeps them guessing, but also gives an inside look into the city of angels. It brings readers to real-life locations from the Sunset Strip, the “Bird Streets” of the Hollywood Hills to Old Bel Air, the Castellammare neighborhood in Pacific Palisades, and Musso and Frank Grill, Hollywood’s oldest eatery.

The Middle Sister is the third release in the Jack Salvo series. Previous books include Church of Spilled Blood and Dead Drop, both of which were met with rave reader reviews and hit Amazon bestseller lists.
************
ABOUT THE MIDDLE SISTER:
A fast-paced thriller reminiscent of a classic 1940’s-style private detective novel set in modern day L.A., The Middle Sister follows beloved character Jack Salvo, a hardboiled, well-educated private detective who just happens to be a sucker for those in need. Salvo teaches philosophy one night a week at a community college, but he pays his bills by solving mysteries.
When a wealthy woman hires him to find her wayward daughter Lillie, who has been missing for a week, Salvo figures the girl is probably hiding out with friends. All he has to do is interview her crew, bust their stories open, and deduce the missing girl’s location – easy, right? Not when he soon learns that her “friends” are somewhat parasitic.
And when he finds Lillie, she is hosting different kinds of parasites — the little ones that help rid the world of rotting corpses. Pulled into a maze of murder, arson, and blackmail, Salvo quickly finds himself on a high-speed-run down L.A.’s fast lane, sparring with grifters and gangsters, dodging the cops, and digging up a dark, deadly family secret.
************
ABOUT THE AUTHOR:

“As a long-time Los Angeles resident, California native, and a die-hard detective novel fan, I loved bringing these worlds together to give readers an immersive, fast-paced mystery while also providing a little escape to the sunny-yet-gritty city of Los Angeles, with all its old-school charm and quirks,” Miles says. “Los Angeles serves as the perfect backdrop for a classic detective novel.”
JESSE MILES grew up in Central California, where his ancestors had arrived from Arkansas and Oklahoma during the Dust Bowl migration. When he was eleven years old, his father took him on a business trip to Los Angeles, and little Jesse immediately decided he wanted to live in L.A.
During his college years in Orange County and Los Angeles, his part-time and summer jobs included work as an insurance investigator in the Hollywood area. That work experience provided some thought-provoking insights into the human condition and laid part of the foundation for his writing detective novels.
Jesse earned an MBA at UCLA and put in three decades with a large corporation, working mostly in computer security. Over the years, he worked with a wide range of law enforcement and military intelligence veterans, learning many lessons of criminality, investigation, and survival.
He currently lives in the Brentwood district of Los Angeles. His interests include classic films, pro bicycle racing, pro football, and Formula 1. In his spare time, he goes to the gym and hikes in the Santa Monica Mountains.
For more information, please visit www.jessemilesbooks.com.

The Middle Sister is available on Amazon and in select bookstores.
************
GIVEAWAY:

I am partnering with Katie Schnack of Smith Publicity for this giveaway.