The German House by Annette Hess 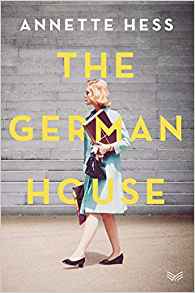 It is 1963 in Germany where the Frankfurt trials are ready to get underway.

We meet Eva who works there as a translator and has a fiancée who doesn’t want her to work after they are married.  Eva isn't sure it will work out.

When Eva attended the opening of the trials, she was horrified at what the defendants had done and were accused of as well as wondered why her parents would never say one thing about the war which made her wonder what part they had played in it.

We follow Eva in her personal life and in her job as a translator for the Polish witnesses who were testifying against the Germans.  Eva was determined to have justice served.

Her personal story told a lot about the type of person she was, but it was difficult for her as well as me to hear the German defendants strongly deny they did anything and pleaded not guilty.

I really liked Eva's parents and loved hearing about the restaurant they owned but they were hiding something.

Her sister who was a nurse was a bit on the odd side and did things at the hospital that weren’t good just to make herself look good.  Her personal life wasn’t much better.

Eva’s fiancée wasn’t someone I cared for, but he had secrets too.

Ms. Hess has a writing style that will pull you in and have you completely absorbed in the book.  Her research is impeccable.

THE GERMAN HOUSE is a book that historical fiction fans will devour.

You do not want to miss reading this book...it is an impressive, powerful, thought-provoking read.  5/5