Photo Source
************
Bryn Kristi of Mindbuck Media is celebrating the release of:


TREASURE OF THE BLUE WHALE

It is the lucky person that stumbles across a chunk of priceless Ambergris*—worth more than truffles or gold.

Award-winning novelist Steven Mayfield’s second book, Treasure of the Blue Whale is out on April 1st.

*Ambergris—used in perfumes—is expelled from the bile ducts of whales.  The fused, slick mass is comprised of indigestible squid beaks and coated with intestinal ambrein. After years of oxidation in the ocean the rare treasure washes ashore.
************

PRAISE FOR TREASURE OF THE BLUE WHALE:

“Treasure of the Blue Whale is a mystifying tale capable of accomplishing what the great American novels often do. It fosters conversation and debate about who we are as people and what makes us tick, while entertaining to the very last page.”—Erick Mertz, author of The Book of Witness and The Lies & Truth of Doctor Desmond Brice

“With Treasure of the Blue Whale, Steven Mayfield has written a fable for our time, a novel we need now more than ever. From the moment Connor O’Halloran and Angus McCallum find a treasure with all its promises, readers are swept up in a journey filled with plot twists and rich characters who continually surprise us with their humanity and ability to find hope.”—Chris Dempsey, author of Winter Horses

“Steven Mayfield’s Treasure of the Blue Whale is a fascinating and wildly inventive narrative that artfully weaves the timeless themes of greed, survival, and love into an epic American tale that grips the reader from start to finish." —Thanh Tan, Two-time Emmy Award-winning journalist and multimedia storyteller.
***********

ABOUT TREASURE OF THE BLUE WHALE:

A rare treasure, a treacherous conspiracy, and a first love set off this witty, wry romp through a depression-era, sleepy-seaside village’s rags-to-riches-to-rags story.

During the summer of 1934 the town of Tesoro gets a taste of fortune when ten-year-old Conner O’Halloran discovers a chunk of ambergris encased in a thousand-pound blob of sewage-sludge that washed ashore. Instead of keeping the treasure of the blue whale to himself, he chooses to split the spoils equally with the town.
The people react in a manic race to acquire useless trinkets—comically transforming the town into a bastion of consumerism. As they are otherwise-occupied, the miserly, cantan- kerous, and allegedly felonious local millionaire-villain devises a plan to cheat the town out of their new-found wealth.
Fearing that the people will lose their homes and livelihood, Connor, together with a small group of sharp-minded, prominent townsfolk, attempt to out-swindle the master swindler.
In this quirky coming-of-age fable of ruin and abundance, Connor learns what is real and what is simply sludge. As the sludge clears the town realizes they had the true treasure all along.
************
ABOUT THE AUTHOR: 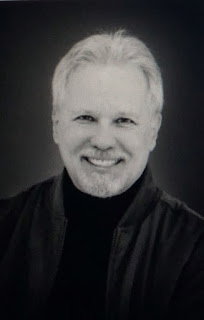 PHOTO CREDIT:
Rebecca Hunnicutt Farren
Steven Mayfield is a past recipient of the Mari Sandoz Prize for fiction and the author of Howling at the Moon, a Best Books of 2010 selection by USA Book News. He lives in Portland, Oregon with his wife and three spoiled mutts.
************
GIVEAWAY:

Best of Luck in the Giveaway.

Here is a link to a livestream on Tuesday, April 2 at 7 p.m.

I am partnering with Bryn Kristi of Mindbuck Media for this giveaway: