SPOTLIGHT of Murder In the East End by Jennier Ashley 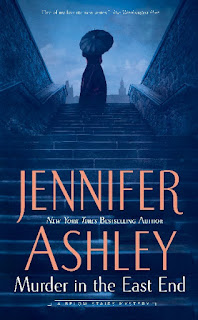 BY JENNIFER ASHLEY
************
Information in this post is courtesy of Stephanie Felty of Penguin Random House/Berkley.
***********
(Berkley Trade Paperback Original; August 4, 2020), the next thrilling romantic historical mystery from New York Times and USA Today bestselling author, Jennifer Ashley.
************
The next installment of this beloved Victorian mystery series, MURDER IN THE EAST END, follows the intrepid Kat Holloway and the mysterious Daniel McAdam in their exhilarating search for the missing children of London’s Foundling Hospital.
************
ADVANCED PRAISE FOR MURDER IN THE EAST END:
This is one of my favorite new series. Ashley writes exquisite historical romance and equally marvelous mysteries.”—The Washington Post

“A smart and suspenseful read, Death Below Stairs is a fun series launch that will leave you wanting more.”—Bustle

“A top-notch new series that deftly demonstrates Ashley's mastery of historical mysteries by delivering an impeccably researched setting, a fascinating protagonist with an intriguing past, and lively writing seasoned with just the right measure of dry wit.”—Booklist

ABOUT MURDER IN THE EAST END:
The fourth Victorian murder mystery in the Kat Holloway series from the New York Times bestselling author of Death in Kew Gardens.
When young cook Kat Holloway learns that the children of London's Foundling Hospital are mysteriously disappearing, she can't turn a blind eye. East End parish vicar Errol Fielding has his suspicions, but the police brush him off, and Kat--and his childhood acquaintance Daniel McAdam--are his last option.

Kat and Daniel are determined to solve the mystery, and Kat engages the help of her scullery maid, Elsie, who reveals she had been a foundling. Their investigation takes them to the less hospitable areas of London, including the very streets where Kat grew up. She soon suspects the answers they seek are much closer to home than any of them realized--and may reveal far more than any of them wants.
************
ABOUT THE AUTHOR:
Jennifer Ashley is the New York Times and USA Today bestselling author of the Below Stairs Mysteries, the Shifters Unbound paranormal romances, and the Mackenzies historical romances. She also writes as USA Today bestselling mystery author Ashley Gardner. Jennifer lives in the Southwest with her husband and cats, and she spends most of her time in the wonderful worlds of her stories.
************