The War Librarian by Addison Armstrong 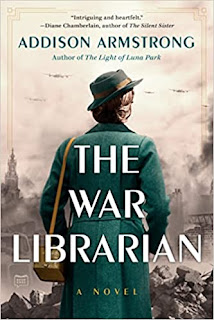 We meet two strong women who are determined to make their way in a man's world.

We meet Emmaline Balakin in 1918 who after working in the dead letter office for five years volunteers to be the librarian in France during the war.  Delivering books to the injured soldiers helps their morale and to pass the time.

Being one of very few women, Emmaline has her struggles, and seeing the wounded soldiers is upsetting for her.

We meet Kathleen Carre in 1976.  She had been working in a dental office, had been raised by her beloved grandmother, and wanted to be in the class of first women accepted into the Naval Academy.

The men really didn't want women in the Academy and bullied and harassed them.  One particular midshipman had it in for Kathleen and tried to humiliate her and trip her up as often as he could.

This midshipman also had her accused of treason.

We follow both women as they make it through their days. There is a connection and secret between the two time lines that will have readers dropping their jaws.

Despite the excellent writing and revelation of the secret in the ending, THE WAR LIBRARIAN dragged for me.  3/5