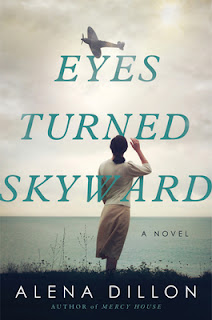 We meet 87-year-old Peggy and her daughter Kathy.

Kathy got a call from her mother that she had fallen. Kathy and her unemployed husband Neil rushed over and learned that Peggy had broken her hip.

Her mother was something to contend with and had a secret that she never told her her children.

The secret was that Peggy had been a pilot in the Women’s Air Force Service Pilots…WASP.

Now Peggy was reduced to relying on her daughter and sons.

Kathy had just gotten a new job, but regardless she would have to deal with her mother since the brothers were all out of state.

When an invitation arrived to attend a WASP reunion, Peggy denied she had been in the WASPS and said the invitation was a mistake. She said she had no idea why she received that.

Kathy found her mother on the front of a magazine which verified that she indeed had been a WASP.

Kathy had to deal with her mother staying with her and caring for her while trying to find out why she got this invitation.

Ms. Dillon perfectly described the difficulties and rewards of parenting and caring for a parent.

I enjoyed the present-day chapters more than the past and did laugh a few times.

A lot of family drama inside.

It was interesting to learn of the WASP program.

Ms. Dillon is a great storyteller. 4/5

This book was given to me by Gretchen Koss of Tandem Literary: Publicity and Marketing for an honest review.