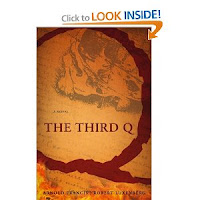 My son was home for the weekend and was enthralled with the book's cover. He wanted to read and review the book so I hope you enjoy my first guest reviewer.


“According to our greatest thinkers, Zoro, we can dissect our world into three worlds.” – Max Cisary
The three worlds, or “Q’s” as the book refers to them, make up the premise for this journey of a chauffeur from a rough part of the Bronx named Zoro and his affluent and eccentric employer, Max.  The authors take us on a journey through New York City and all of its famous landmarks such as Bryant Park, the Metropolitan Museum of Art, and other notable sites while telling us that once we discover the 3 Q’s our life will be changed forever.
The first Q, the subconscious mind, is the first step on the road to unimaginable wealth.  The second Q, the conscious mind, is the second step on the road to God-like power.  The Third Q, and the premise of the story, is unlocking your mind from itself and placing yourself in a Nirvana-like state.  In order to find the missing 4th sketch which purportedly contains a word, that once spoken will reveal the true name of God and give the speaker unimaginable power and wealth, Zoro must master the three Q’s and unlock the secret of where his deceased father hid the missing Michelangelo sketch.
The story primarily takes place inside of Max’s Bentley limousine.  While Zoro is driving and going through many emotional breakdowns and fighting NYC taxi traffic, Max is in the back seat instructing him on how to master the three Q’s.
Throughout the story, the authors weave an intricate tale of good versus bad, rich versus poor, and powerless versus powerful.  The story reads very much like a Dan Brown novel set in New York City with themes such as the evil assassin, the secretive rich man, the hunt for the missing treasure.
Overall the story was entertaining and an easy read, but it  lacked real depth and character development.  With the 1 to 3 page chapters, the story jumped frequently between different characters, settings, and totally unrelated themes, such as break-ins, maritial stress, and “Q” mentoring sessions.  At the end of the day, I felt no genuine sympathy for the plight of Zoro as everything that he did to solve the mystery appeared to be out of his control and defined by his destiny and his subconscious thinking instead of merit and hard work.  While an entertaining read, it is the Da Vinci Code rehashed again with different characters and a different city.  3.5/5