Under The Same Blue Sky by Pamela Schoenewaldt 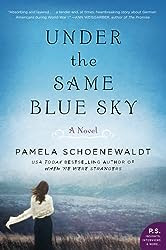 Where did Hazel belong?  Did she belong in Dogwood, Pittsburgh, or somewhere else.

Hazel Renner's mother left her and left Dogwood, and Hazel's aunt and uncle lovingly raised her in Pittsburgh.  The smog of Pittsburgh and the effects of war upon the citizens also had an effect on Hazel.

Like her mother, Hazel wanted to leave and find where she really belonged.  She first tried teaching in Galway, but things happened there that necessitated her leaving and coming back home.  Hazel then tried Dogwood where her she was born to see if that would help her find her roots.

UNDER THE SAME BLUE SKY will pull you in because of the beautiful descriptions and wonderful characters.  ​You will love Hazel and her parents and feel sorry for her and all the problems she encounters.  ​Hazel's father was quite intense about his heritage and the war.  You could vividly feel his every concern and the emotions of every character because Ms. Schoenewaldt has ​a marvelous ​knack for words and for descriptions of characters and situations.​

You will enjoy UNDER THE SAME BLUE SKY because of the nicely flowing storyline.  The only ​complaint I have is that I was really confused at the beginning.  The healing power of Hazel was a bit confusing too and not sure why it was in the story.

UNDER THE SAME BLUE SKY is worth reading because of the wonderful writing style of Ms. Schoenewaldt and her marvelous research of WWI.  She has a very descriptive and in-depth writing style.​

This book was given to me free of charge and without compensation by the publisher and TLC book tours in return for an honest review. 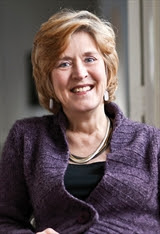 Pamela Schoenewaldt lived for ten years in a small town outside Naples, Italy. Her short stories have appeared in literary magazines in England, France, Italy, and the United States. She now lives in Knoxville, Tennessee, with her husband, Maurizio Conti, a physicist, and Jesse, their dog.
Find out more about Pamela at her website, keep up with her on her blog, and connect with her on Facebook.