Flight of Dreams by Ariel Lawhon 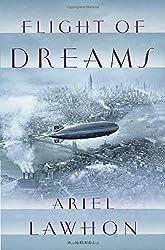 ​Could anyone have secrets on the Hindenburg with its size and carefully patrolled space?

It appeared that everyone had a personal secret, but one of the public secrets was the worry about a bomb threat.

The passengers had heard of a bomb threat, but it was down played.

Emilie, Max, Werner, Edward, and Leonhard and Getrude Adelt are the main storytellers.  Emilie was the only female crew member on board, Max was the navigator, Werner was the cabin boy, Edward was an American, and the Adelts are journalists.

FLIGHT OF DREAMS tells of the three-day flight of the Hindenburg and its fire on the third day as it neared its landing spot of Lakehurst, New Jersey.

We follow the days and nights of the passengers as the Hindenburg makes it way across the ocean at 600 feet and as it drops to 200 feet to make a mail drop in Cologne before heading out to the ocean.

Ms. Lawhon takes us into the private as well as public lives of the passengers and makes the three-day trip across the Atlantic both technical and personal.  The skillful way Ms. Lawhon wove the personal stories of the characters with the technical aspect of the Hindenburg made FLIGHT OF DREAMS a captivating, intriguing, mysterious read.

Ms. Lawhon did marvelous research for her book​, and the passengers were an interesting group.

I enjoyed Emilie and Max's connection and their love story.

Werner was my favorite simply because he was so young, so happy to be a crew member, and such a hard worker.

The Adelts were an interesting couple simply because of their curiosity and wanting to find out facts like every good journalist does.

It was fascinating to me how the Hindenburg actually stayed in flight. It is a piece of history I had ​known of but never knew much about.  I learned quite a bit about the Hindenburg from Ms. Lawhon's marvelous book and wanted to learn more.  I found plenty of information about the Hindenburg itself, the flight, the crew, its passengers, and the crash.

Could one of the passengers purposely have caused the crash or was it a mechanical malfunction?  Did historians really know what happened?

FLIGHT OF DREAMS is a well-researched and cleverly carried out book about the Hindenburg that will hold your interest.

What a wonderful way to learn more about this historical event. 5/5​