Guest Review of The Essex Serpent by Sarah Perry

**********
My guest reviewer is my son, Mark, who did a marvelous job reviewing a book I didn't have time to read nor one that would have held my interest.

He read the book on his way back from a trip to Europe.  The photo is while he was on the plane and in his pajamas.  :)  He was flying first class in Lufthansa...excellent airline to fly. 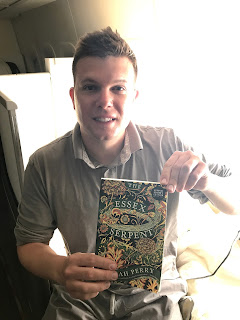 Thank you, Mark.  I hope you, my readers, enjoy his take on THE ESSEX SERPENT, and if you have read the book, let us know what you think.

**********
When I was first invited to do a guest review for this book, I was so excited because I love historical European fiction, especially in Britain.  And then I found out a little bit more like a vicious sea serpent, a gruesome murder, a grieving widow all the makings of a title worthy of top ranking on my bookshelf.

My initial excitement could not have been more wrong, but in a different way than I initially expected, and overall I was surprised and mildly charmed by THE ESSEX SERPENT by Sarah Perry.

The book begins with a death in prominent Victorian English high-society and continues on with a widow who should be grieving, but seemingly felt bound by the chains of marriage and therefore seemed somewhat relieved by her husband’s untimely death.

The story begins when the widow, Cora, relocates from London to Essex to raise her now fatherless son.  Cora integrates herself into Essex society as if she were one of the locals, especially with the local Vicar, William Ransome.  The base of the story and the main characters all seem to circle around this relationship and focus on the events of their comings and goings.

Admittedly, I was expecting a book about Cora and her love interest, the local Vicar, chasing a serpent through the English countryside to discover the identity of the beast who was on a murdering rampage through Essex.  Instead, this is a book about human life, love, religion, medicine, surgery and the human heart.

Depending on your take on this, this is both a good and a bad twist.  This is a good twist because at the end of the story, I understood the point of view of the author when writing to create a world where the “serpent” had paralyzed the town with fear; however, I really was expecting a genuine mystery instead of a story about human life and tendencies.

As the story weaves through 11 months of the year, I can’t say that I am disheartened with the way the author chose to spin the story; however, ultimately I ended up disappointed.  The lack of expected thrill and mystery of chasing the serpent left me wishing I had stopped reading when the chapter turned from January to February.
However, when I finally got to the crux of the story approximately 395 pages into the book, I smiled.  The story is a heartwarming tale of the way fear of the unknown changes people and brings unexpected relationships to fruition.

Overall the story kept my attention, but it had a lot of secondary characters who I still cannot grasp their relevance to the main plot. Throughout the story I had trouble keeping up with who was who and their relevance.

The story jumped frequently between different characters, settings, and seemingly unrelated themes which left me going back to a previous chapters to recollect their significance.

At the end of the day, the title of the book enraptured me into thinking it would be a heroic tale of chasing and slaying a serpent, but ended up a love story and one of human character and its frailties.  3/5.