Giveaway and Spotlight of Monsters: A Love Story by Liz Kay

I AM PARTNERING WITH PENGUIN RANDOM HOUSE FOR THIS GIVEAWAY

ALL INFORMATION IN THIS POST IS COURTESY OF Madeline Schmitz


Stacey Lane feels like a monster. Tommy DeMarco might be one. Since her husband died eight months ago, Stacey’s been a certified mess—an acclaimed poet who can’t write anymore, a good mother who feels like she’s failing her kids. She’s been trying to redefine herself, to find new boundaries. Tommy has no respect for boundaries. A surprisingly well-read A-list Hollywood star, Tommy’s fallen in love with Stacey’s novel-in-verse, a feminist reimagining of Frankenstein, no less. His passion for the book, and eventually its author, will set their lives on a collision course. They’ll make a movie, make each other crazy, and make love—but only in secret. As Stacey travels between her humdrum life in the suburbs of Omaha and the glamorous but fleeting escape Tommy offers, what begins as a distracting affair starts to pick up weight. It’s a weight that unbalances Stacey’s already unsteady life, but offers new depth to Tommy’s. Riveting, poignant and always surprising, MONSTERS: A LOVE STORY reveals how meeting the right person can be as much brutal as it is breathtaking. With Liz Kay’s beautiful spare prose and snappy dialogue, the novel deftly details the ways we love, even when we’re not at our best, and delivers an eminently satisfying love story. Jill Alexander Essbaum, New York Times-bestselling author of Hausfrau raved, “Witty and so nimbly-worded, Liz Kay’s Monsters: A Love Story had me at hello.” 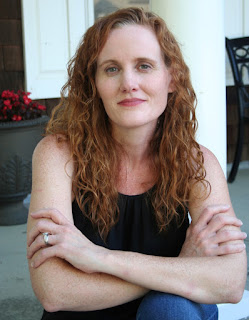 Liz Kay holds an MFA from the University of Nebraska, where she was the recipient of an Academy of American Poets Prize. She is a founding editor of Spark Wheel Press and the journal burntdistrict. Her work has appeared in Willow Springs, Nimrod, RHINO, Sugar House Review, and Beloit Poetry Journal, and has been nominated for the Pushcart Prize and Best New Poets anthology. She lives in Omaha, Nebraska with her husband and three children.
*********
Selected Praise for MONSTERS: A LOVE STORY:

“The unlikely romance between a feminist poet and the Hollywood heartthrob who options her book is at the center of Kay’s entertainingly dyspeptic Monsters.”
–Vogue

“In the tradition of Lolly Winston’s Good Grief . . . this fast-paced novel will have readers immersed in the heady feeling of an alcohol-fueled affair with one of the sexiest men alive.”
–Library Journal (starred review)

“Witty and so nimbly-worded,  Monsters had me at hello. From the near-madcap improbability of the novel’s premise, to the punchy repartee and ping-pong banter between Stacey and Tommy, it’s impossible to resist the book’s charms. .”
–Jill Alexander Essbaum, New York Times bestselling author of Hausfrau

“A perfectly imperfect love story . . . Kay has created a heartfelt, sometimes dark but ultimately romantic story about what happens when two broken people come together.”
–BookPage

“A smart, satirical feminist novel, but as the subtitle suggests, it's also a romance.”
–Shelf Awareness

“I love to see truth in writing when it comes to love and relationships . . . [Monsters is] an electric, fast-moving novel.”
–B&N Reads

“Monsters is an addictive read: a page-turner that is at once dark and uplifting, shocking and hopeful. Kay's book takes a sharp spin on the notion of fairy tale romance.”
–Janelle Brown, bestselling author of All We Ever Wanted Was Everything

"At times somber, at times heartwarming, the story of this improbable romance is an addictive page-turner, ripe with seduction and charm, that drops insights into this messy, crazy, wonderful thing called love.."
–Washington Independent Review of Books

“This one will make you laugh and cry, but Kay’s debut novel, about a poet grappling with the death of her husband, is a must-read. A smart look at grief and how we bounce back from it, Monsters is fast-paced and completely addictive.”
–Purewow, Ultimate Summer 2016 Book Pick

“The novel’s wry insights into messy relationships put me in mind of The Love Affairs of Nathaniel P. and Emma Straub’s The Vacationers.”
–Timothy Schaffert, critically acclaimed author of The Swan Gondola

“This edgy and entertaining novel would make a great beach read.”
–Booklist

“The meeting of kindred spirits is often as punishing as it is beguiling. When monsters fall in love, it is impossible not to watch, impossible to put the book down.”
–Rebecca Rotert, author of Last Night at the Blue Angel

“Reads like a seduction. I couldn’t stop. . . Monsters they may be, but vulnerable monsters with hearts full of yearning.”
–Amy Hassinger, author of The Priest’s Madonna