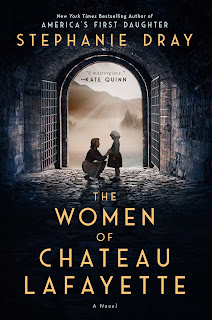 All information in this post is courtesy of Loren Jaggers of Penguin Random House.

An epic saga from New York Times bestselling author Stephanie Dray based on the true story of an extraordinary castle in the heart of France and the remarkable women bound by its legacy in three of humanity's darkest hours.

Most castles are protected by powerful men. This one by women...

1774. Gently-bred noblewoman Adrienne Lafayette becomes her husband's political partner in the fight for American independence. But when their idealism sparks revolution in France and the guillotine threatens everything she holds dear, Adrienne must choose to renounce the complicated man she loves, or risk her life for a legacy that will inspire generations to come.

1914. Glittering New York socialite Beatrice Astor Chanler is a force of nature, daunted by nothing--not her humble beginnings, her crumbling marriage, or the outbreak of war. But after witnessing the devastation in France and delivering war-relief over dangerous seas, Beatrice takes on the challenge of a lifetime: convincing America to fight for what's right.

1940. French school-teacher and aspiring artist Marthe Simone has an orphan's self-reliance and wants nothing to do with war. But as the realities of Nazi occupation transform her life in the isolated castle where she came of age, she makes a discovery that calls into question who she is, and more importantly, who she is willing to become.

Intricately woven and beautifully told, The Women of Chateau Lafayette is a sweeping novel about duty and hope, love and courage, and the strength we find from standing together in honor of those who came before us.

Q & A FROM THE AUTHOR

What made you fall in love with Adrienne Lafayette and why do you think readers will fall for her as you did?

Thanks to a popular musical, the Marquis de Lafayette is known to a new generation as "America's Favorite Fighting Frenchman"--and there's good reason for that. He's easily the most lovable of our Founding Fathers, and his wife, whom he called his dear heart, is just as lovable if not more so. Adrienne was our French Founding Mother, so right up my alley as a heroine, but at first I worried she was too sweet, devoted, and forgiving. In short, too gentle for a novel. Little did I realize that more than any other historical heroine I've ever written, Adrienne fought and sacrificed for her principles, courageously threw herself into danger, confronted tyrants, and endured trials that would have broken lesser mortals. She truly humbles me, and when I talk about the Lafayette legacy, I think of it as every bit as much hers as it is his.

How long did it take you to write this book? Did the story evolve as you researched, or did you always know you wanted to take on the lives of these particular women?

I was always interested in Lafayette--an interest that grew as Laura Kamoie and I co-authored America's First Daughter and My Dear Hamilton. I think I had the germ of the idea for a Lafayette novel at least seven years ago, but I had other projects in the way. And I was always in search of an angle that would be fresh and unique. That came to me when I discovered that Lafayette's castle in Auvergne, which had been purchased and renovated by Americans, served to shelter Jewish children from the Nazis. Knowing how deeply the Lafayettes both felt about religious freedom, I knew this would have pleased them, and it touched me. I was then determined to know which Americans had purchased the chateau, and when I found out, yet another glorious chapter in the Lafayette legacy was born. That's when the story took shape for me about one special place on this earth where, generation after generation, faith has been kept with principles of liberty and humanity. I find that very inspirational, now more than ever.

The book is centered around Lafayette’s castle, the Château de Chavaniac, and the pivotal role it played during three of history’s darkest hours—the French Revolution and both World Wars. If you could have dinner with any three people (dead or alive) at Chavaniac, who would you choose and why?

Believe it or not, this is actually a difficult choice because so many incredible men and women passed through those doors. I'd have to start with the Lafayettes--though I hope they would not serve me pigeons, which were a favorite at their wedding banquet. To join us for dinner, I'd choose the colorful stage-star of the Belle Epoque, Beatrice Chanler, because she was a force of nature without whom Chavaniac might not still be standing. Actress, artist, philanthropist, decorated war-relief worker and so-called Queen of the Social Register, she was as mysterious as she was wonderful, and even after all the startling discoveries I made researching her larger-than-life existence, I have a million questions about the early life she tried so hard to hide. I can't wait for readers to meet her!
************
ABOUT THE AUTHOR
Stephanie Dray is the New York Times bestselling co-author of America’s First Daughter and My Dear Hamilton. Now Dray turns her eye towards the French founding mother Adrienne Lafayette, in an epic generational saga based on Lafayette’s extraordinary castle in the heart of France, and the remarkable women bound by its legacy through revolutionary upheaval and two world wars.
**********

https://www.stephaniedray.com/fun/newsletter/
GIVEAWAY INFORMATION
You can enter for a chance to win an advanced digital review copy of the book HERE.  (NO PURCHASE NECESSARY. US Residents, 18+. Ends 7/19. See official rules at official website.)