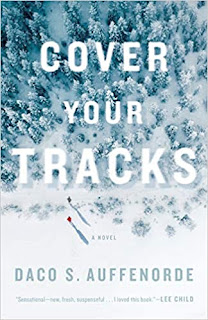 A snowstorm, a stopped train, an avalanche, and only two survivors.

How could a peaceful train ride turn into a nightmare?

It can when an avalanche threatens to knock the entire train off of the cliff and it does.

Margo, who was eight months pregnant and the only one who listened to one of the passengers and moved to the very last car on the train.  Moving saved them both from tumbling down the hillside when the avalanche struck, but they weren't safe inside the last car for too long either.

The avalanche even threatened the last train car. Margo and Nick left the car and trudged in the deep snow and ran toward a new avalanche so they were under the snow instead of pushed by it.

We follow Nick and Margo as they make their way to finding shelter since a rescue team won't be able to find them or the train disaster in this storm.

Both Nick and Margo were interesting characters, and when we hear about their childhoods, they were not good ones. In addition, they both had secrets that affected them deeply.

COVER YOUR TRACKS has pull-you-in writing.

Ms. Auffenorde shared a lot of survival information that must have taken a lot of research.

Both Margo and Nick definitely needed survival techniques in the snowy, isolated, frigid environment they found themselves in.

COVER YOUR TRACKS became very intense as fear for both Nick and Margo increased. The fears I had for each character were for different reasons.

Could this nightmare get even worse?

COVER YOUR TRACKS has a creative story line and will have you on edge from the minute they escape the avalanche's wrath until you turn the last page. 5/5

This book was given to me by the author in exchange for an honest review.