ROBERT McCAW
************
ALL INFORMATION IN THIS POST IS COURTESY OF MICHELLE FITZGERALD | PUBLICITY DIRECTOR | FSB ASSOCIATES.

"Another solid Koa Kane novel from author Robert McCaw. A well-written adventure, with lots of twists and turns, keeps the reader on edge throughout the novel. Book four is as good as book one.”
—Red Carpet Crash

"I have had the pleasure of reading, I think, all of the books in McCaw’s series with Detective Koa Kane. I have loved reading and reviewing them. He has a wonderful way or making the readers feel as if the are part of the story. I enjoyed it immensely and believe you will too."
— Bookpleasures

"As its title suggests, Treachery Times Two is a riveting, double-edged mystery. Whether you enjoy good, old-fashioned police work or a moral tale of right and wrong, this one’s got it all.”
— Story By G. Robert Frazier

“Author Robert McCaw has created another winning novel…If you are a lover of murder mysteries, put this author and this series on your reading queue."— Men Reading Books

"Robert McCaw has hooked us with his Koa Kāne novels. Treachery Times Two is the fourth in the series starring our native Hawaiian police detective. This may be the best one yet. This tale keeps the reader guessing with surprises to the very end. As with many detective stories, there are clues that readers may overlook, and there are few throwaway lines in this adventure."— English Plus
"I so enjoyed getting lost in this book and read it ravenously. It also made me really want to go back and read the first three books in the series. Highly recommend!"
— Lil Red’s Book Club

"Even better than its prequels, Treachery Times Two brings everything you’ve come to love about the Koa Kāne series – mystery, culture, and characterization – and ups the ante.”
— The Book Review Station

On Hawaii Island, a volcanic earthquake disrupts an abandoned cemetery—unearthing the body of a woman mutilated by her killer to conceal her identity. The search for her identity leads Hilo, Hawaii’s Chief Detective Koa Kane to a mysterious defense contractor with a politically connected board of directors. Defying his chief of police, Koa pursues the killer, only to become entangled in an FBI espionage investigation of Deimos, a powerful secret military weapon. Is the FBI telling all it knows—or does it, too, have a duplicitous agenda?

As the same time, Koa—a copy who thirty years earlier killed his father’s nemesis and covered up the murder—faces exposure by the dead man’s grandson. Koa is forced to investigate his own homicide, and step by step, his cover-up unravels until another man is falsely accused. Can Koa stand by and let an innocent man pay for his crime?

As the plots twist and turn and Koa juggles the past, present, and future, McCaw expertly illustrates the tenacity of the human spirit. 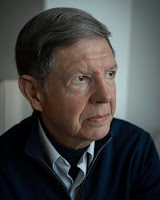 PHOTO CREDIT:  Calli P. McCaw
Robert McCaw grew up in a military family, traveling the world. He is graduate of Georgetown University, served as a U.S. Army lieutenant, and earned a law degree from the University of Virginia.
He was a partner in a major international law firm in Washington, D.C. and New York City. Having lived on the Big Island of Hawaii, McCaw imbues his writing of the Islands with his more than 20-year love affair with this Pacific paradise.
Treachery Times Two is the fourth in his Koa Kane Hawaiian Mystery Series, following Death of a Messenger, Off the Grid, and Fire and Vengeance.
He now lives in New York City with his wife, Calli.
************