Shades of Murder by Lauren Carr 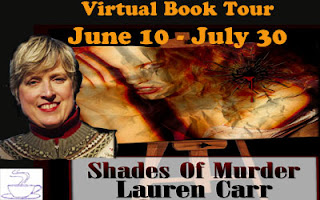 Can you be murdered more than once and years apart?  That is the question that the police department in Spencer along with Mac Faraday had to figure out, but they didn't know Ilysa Ramsay had been murdered eight years ago and then again in her studio as she finished her final painting.  Someone knew how that could be accomplished, though.   Could as they say......a picture is worth a thousand words be a clue in the revealing of the murderer and other shady dealings?

Ilysa Ramsay, a famous artist and wife of a CEO, was found bludgeoned to death in her studio, and her last painting was stolen.  The stolen painting was mailed by a friend to Mac's mother who had passed away, and he figured something fishy was going on, and so the case was re-opened.

Re-opened to the tune of new characters and a new murder in another great Lauren Carr mystery.  The familiar characters of Mac, Gnarly, Archie, and David made you feel at home while reading.  The new characters made the read intriguing.  Ms. Carr definitely comes up with great twists and turns and plots that are hard to beat.  And even better is the fact that Mac and Archie finally became romantically involved….we all wanted that to happen…thanks, Lauren.

You will be amazed at how cleverly Ms. Carr put the story together and wove two murders into one.  It is a murder mystery with a storyline that I have never seen before.  This is her third book that I have read, and I enjoyed each one of them....the town, the characters, the ambiance of the Spencer Inn, the creativity, and the surprise endings are worth the reads.