Giveaway of The Franciscian by WR. PARK 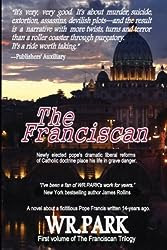 WR.PARK’s The Franciscan is the most internationally anticipated religious suspense-thriller since Dan Brown’s Angels & Demons and The Da Vinci Code. Written 14 years ago, The Franciscan eerily forebodes current events in the Vatican predicting the coming of the current Pope Francis and proves to be a timely novel more than a decade after it was penned.

“The pope is not infallible.” When the newly elected Pope Francis utters this bold and unprecedented statement, he captures the attention of the world’s population. His reforms leave no corner untouched as he strips away the mask so long held before the face of the papacy. Bringing with him and open-minded candor rarely seen by public figures – he’s an inspiration to his followers – and a threat to those who oppose him.


Enter here to win a copy of The Franciscan