Review and Giveaway of Doctor Death by Lene Kaaberbol 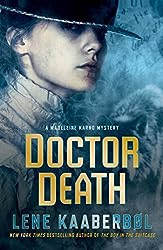 A disappearance, a dead body and then other dead bodies.  What caused the deaths? Was it murder, a natural death, or something else?

Meanwhile, someone was murdering town folks and mutilating them with human teeth bites. Madeleine was required to help even though her father wasn't happy, but she definitely was.

DOCTOR DEATH was a bit slow at first, but once the reader is taken to the convent and other murders happen, DOCTOR DEATH unveils hidden secrets of the town and the book's characters. I love secrets, doesn't everyone, though?

DOCTOR DEATH went from learning about medical procedures to solving multiple murders to an odd ending.

The book was very different in terms of content and a bit confusing.  Great characters, though.  Even though the ending was  odd, it did wrap things up.

I enjoyed the read, but it isn't a favorite just because of the slow beginning, confusion about who was who and what was going on, and the odd ending.  3/5

The Contest has ended.   The two winners are: