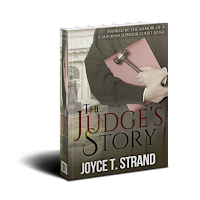 A Superior Court Judge with a passion for social justice as well as the law strives to discover the truth behind the mystery of a robbery-murder in a small California town in 1939.

When the Judge hears testimony against a 14-year-old teenager, he realizes that the boy participated in a robbery-murder.

However, the accused did not actually pull the trigger. But unless the boy identifies his partner, the Judge must sentence him as a murderer, which would result in prolonged jail time.

The Judge’s investigator, along with the precocious 16-year-old girl who identified the boy as one of the thieves, explore different approaches to uncover the murderer.

In the backdrop of escalating war in Europe, the financial scarcities of the Great Depression, and the Judge’s caseload, their attempts to find justice for the accused boy and unmask the killer lure the Judge and his friends into sordid criminal activities. 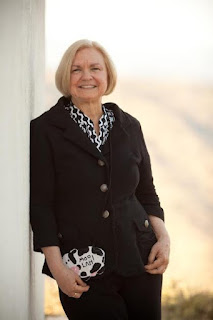 Mystery author Joyce T. Strand, much like her fictional character, Jillian Hillcrest, served as head of corporate communications at several biotech and high-tech companies in Silicon Valley for more than 25 years.

Unlike Jillian, however, she did not encounter murder. Rather, she focused on publicizing her companies and their products. She is the author of the Jillian Hillcrest mysteries ON MESSAGE, OPEN MEETINGS, and FAIR DISCLOSURE and the Brynn Bancroft mystery HILLTOP SUNSET.

Strand received her Ph.D. from The George Washington University, Washington, D.C. and her B.A. from Dickinson College, Carlisle, PA.

She currently lives in Southern California with her two cats, a collection of cow statuary and art, and her muse, the roadrunner. 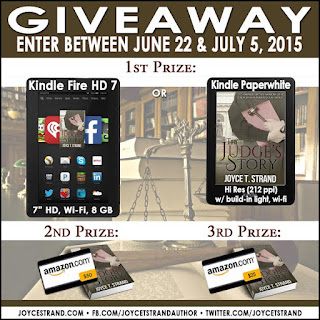 “We discovered my grandfather’s memoir in his attic. Before becoming a Superior Court Judge, he was a law partner of Erle Stanley Gardner – maybe you’ve heard of him? He wrote the Perry Mason series. Gardner thought my grandfather should write his story because he had such an interesting life.”—Lou Drapeau, grandson of Superior Court Judge Louis Drapeau, the inspiration for The Judge’s Story.

Do you know that feeling when you’ve just received an opportunity to do something significant? Well, that’s how I felt when my friend told me about his grandfather’s memoir at lunch one day. I did try to keep the excitement out of my voice when I asked if I could have a copy, but was delighted when he agreed to send it to me.

I read the memoir several times. (For those interested: Louis C. Drapeau, Senior; Autobiography of a Country Lawyer; 1941; available at the Museum of Ventura County/Library, 100 E. Main St., Ventura CA 93001).

What stopped me from proceeding with my own story about this distinguished judge was that I couldn’t think of any way to improve on the memoir. He chronicles his life and tells of a teenager basically disowned by a stepfather and his biological father who managed to support himself doing odd jobs as a cowboy, muleskinner, Borax 20 mule team driver and dockhand.

Eventually he met and worked for a Senator, earned a law degree from Georgetown Law School, settled in Ventura, Calif., practiced law, and became a Superior Court Judge by the late 1930s. A compelling story in its own right!

Besides not immediately envisioning a unique story, I was also busy writing and publishing my current-day mysteries. So I put off telling the judge’s story, but he stayed somewhere in my mind percolating. What could I write about a judge who lived in the mid-20th century that would be distinctive but capture this interesting person?

Well, I reminded me that I’m a mystery writer. So I could write a mystery. But how could I integrate a judge from the first half of the 20th century into an intriguing mystery for today’s readers?

The answer came to me from the judge’s memoir. First, he clearly told me who he was—his values, beliefs, emotional makeup, and ethics. So I developed my fictional Judge Grover Roswell Akers using attributes of the actual judge.

Next, the actual judge discussed the issues that were important in the legal system in the 1930s—the growing prevalence of rehabilitation as part of the penal system. He also expressed opinions on how to keep boys from becoming criminals and had an avid interest in helping juveniles.

Ah, ha! Surely I could produce a mystery based on juvenile crime and debate over how to deal with these young criminals.  Although the case in my mystery is fictional, the actual judge’s statements about the impact of the times sparked the idea for it, i.e., the Great Depression, on juvenile crime.

Finally, the memoir offered the judge’s opinions on a variety of subjects, such as, the value of history, perspective on WWII, and reflections on reading and education—all attributes I could explore to enhance my characters. I did supplement the back-story with additional research into the events in 1939 in Ventura, Calif., but, again, the judge’s actual statements motivated the mosaic pieces that enabled me to build the fictional characters.

I concluded that the real judge was a bit of a hero. As an attorney, he defended Mexican-Americans who he believed were not treated fairly—often without compensation for representing them. He also worked to create fairer laws. For example, he believed that the punishment in Ventura County for killing cattle was far too severe and did not match the crime. And he admonished those who would become attorneys to be careful of the type of people they defended, for they would become associated with their clients. He also feared for a system of justice that relied on people like him to be a judge, but, in the end, if the evidence or the law was not clear, he did what he believed was right.

Yes, I wrote a fictional mystery, because that’s what I do. However, I also intended that the story about this fictional judge should pay tribute to the actual judge who inspired it.

ALL INFORMATION WAS GIVEN TO ME BY THE AUTHOR AND/OR PUBLICIST.

About The Social Links

About Where to Purchase