Review and GIVEAWAY of A Paris Apartment by Michelle Gable 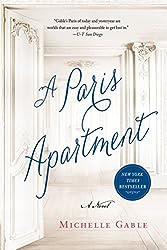 Paris in the late 1800's​ during the Belle Epoque​, antique furniture and paintings, and journals from an apartment's original inhabitant.  All of these things made A PARIS APARTMENT a book that will keep you glued to the pages.

Who wouldn't want to go to Paris?  April was an art history major and an auctioneer. When her boss told her she would be going to Paris to put value on an apartment's contents that had been closed up for 70 years, she couldn't pass up the chance even though her marriage was a bit rocky.

When April found the journals of Marthe de Florian, they made the apartment’s contents even more valuable and the book quite enticing. The journals told about Marthe de Florian's life and her connection and relationships with artists and other famous people.

Famous people such as Victor Hugo and Giovanni Boldini were part of the book's intrigue.  Marthe de Florian had quite a colorful life.

A PARIS APARTMENT was a bit rough getting started, but once the journals were found, they and the Parisian atmosphere ​drew you into the era and its living style.

​A PARIS APARTMENT is based on a real apartment and a real person.  Ms. Gable did a great deal of research and weaves the story so masterfully that you don't even know it is history, but it definitely revealed a wonderful hidden part of Paris.

For a debut novel, the writing ​and storyline were marvelous.  A PARIS APARTMENT has beautiful, descriptive writing, and the journals made it oh so good.

April’s rocky marriage seemed to be a side story, but the apartment, its contents, and the journals are historical aspects that I thoroughly enjoyed and what kept me reading.

The ending was marvelous as April met an eighty-seven-year-old family member of Marthe de Florian who fills in the gaps of Marthe’s life.

This book was given to me free of charge and without compensation by the publisher in return for an  honest review.

USA and CANADA ONLY