Review and Giveaway of A Curious Beginning by Deanna Raybourn 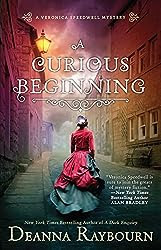 A secret past that she wasn't aware of puts Veronica Speedwell in danger after her aunt passed away.

Veronica  Speedwell is now without family, and as an intruder enters her home and tries to harm her, a Baron saves her life just in time.  Even though Veronica seems to be able to take care of herself, the Baron insists that he be her protector.  The Baron and Veronica begin a journey to London to meet a friend the Baron believes can protect Veronica for him.  During their travel time, the Baron tells Veronica he knows secrets about her past that he can't tell her just yet but will.

Veronica isn't too happy with the arrangements of having to be protected, but being interested in what the Baron will tell her makes her stay with the Baron’s friend, Stoker.  Not even 24 hours after the Baron left Veronica in safe keeping with Stoker, the pair finds out that the Baron has been murdered.  With that news Stoker whisks himself and Veronica away where the murderer who most likely is still after Veronica can't find them.  Adventures and danger follow them.

A CURIOUS BEGINNING is the first book I have read by Ms. Raybourn and the character Miss Speedwell.  The book is interesting but odd with odd characters.  Miss Speedwell is very independent and Stoker is a taxidermist who once was with a traveling circus. The characters where Stoker and Veronica make their hiding place are all quite bizarre, but I guess when you are in a traveling circus, that is what you see.

A CURIOUS BEGINNING is adventure and murder investigations all rolled into one with some good twists.  It was also comical at times.

A CURIOUS BEGINNING was a bit different from what I expected, but I kept reading because I wanted to find out who the murderer was as well as to find out what Veronica's secret past was.   And....her past was an excellent revelation.

It wasn’t a favorite, but I did like Veronica, and the storyline picked up toward the end of the book.   In fact, the ending was quite  exciting and makes my rating go from my original 3/5 to 4/5.

Readers who like quirky characters, intrigue, mystery, and a bit of romance should enjoy A CURIOUS BEGINNING. 4/5