Modern Girls and The Ones Who Matter Most Giveaway 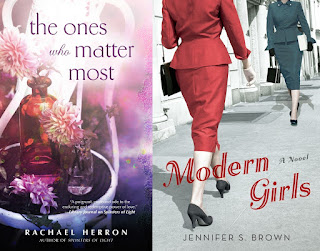 Just in time for Mother's Day.

Lauren Burnstein of Penguin Random House is offering one of these books to two USA lucky winners.

You get to choose which one you would like to win by filling out the form at the bottom of this post.


********
ALL INFORMATION BELOW IS COURTESY OF THE PUBLISHER:

THE ONES WHO MATTER MOST by Rachael Herron

After her husband dies unexpectedly, Abby Roberts finds wedding photographs of him with another woman, along with pictures of a baby boy. Shocked, she does something utterly impulsive: she embarks on a journey to discover the family her husband apparently left behind.

What begins as one woman’s search for truth becomes a deep bond forged between the unlikeliest of people. Their surprising journey reveals how strangers can quickly find themselves to be family.

Herron’s mastery of grief, love, and the human condition was honed by her career as a 911 volunteer. She says: “Everything I know about the strength of the human heart and its determination to love comes from the calls I take on a daily basis. I’ve heard hearts break. I’ve heard love in every language, and it sounds the same.”

Pack Up the Moon was named by Working Mother magazine as one of the best gift books for Mother’s Day in 2014. THE ONES WHO MATTER MOST resonates with similar themes of family, highlighting how the most unbreakable bonds can often be the most unlikely. Herron’s previous novels, Splinters of Light and Pack Up the Moon, have been called “riveting” (Booklist), “emotional” (RT Book Reviews) and “poignant” (Library Journal).

Though Dottie lives with her traditional Yiddish-speaking parents, she’s as modern as a 1930’s girl can get: she has just been promoted as head bookkeeper at a glittering midtown office,
plans to marry her swoon-worthy boyfriend Abe, but still dreams of a home ripped from the pages of Better Homes & Gardens. But after a fight with Abe, and a single careless night with the charismatic but unsuitable Willie, Dottie finds herself in the family way. Desperate, she is unwed, unsure, and running out of options.

Meanwhile, as news of Jewish persecution in Europe spreads, Rose longs to return to the social activism she embraced as a young woman in Russia. But when she finds herself pregnant with a fifth child, she wrestles with profound disappointment at being forced to once again set aside political work, even as her brother remains trapped in Poland.

As both mother and daughter wrestle with unthinkable choices, they are forced to confront their beliefs, and the changing world around them. What they choose to do next will yield astonishing lessons about what truly lies in each woman’s heart. Only one thing is for sure: neither will ever be the same again.