Spotlight and Giveaway of One Flew Over The Banyan Tree 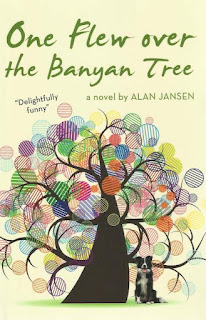 1960s Post-Colonial Nostalgia Collides with Quirky Characters in Historical Fiction Debut
A LIGHT-HEARTED COMING OF AGE TALE OF ADVENTURE AND TRANSFORMATION
"One Flew over the Banyan Tree is rich with meticulous detail and digression,
and the payoff for the many escapades is worth the wait."
-- Clarion Review


All Information in this post is courtesy of Elizabeth Martins of Smith Publicity.
************
How does a young boy find his way after his father loses a critical job and abandons his family in a small island town? In Alan Jansen’s stunning historical fiction debut, One Flew over the Banyan Tree, clever eleven-year-old Rohan grapples with this loss as he finds himself navigating a new world among a cast of colorful characters.

Set on the fictitious island of Victoria (resembling Post-Colonial Sri Lanka), One Flew over the Banyan Tree takes readers through a panoramic journey of life in the 1960s.

Centered on young Rohan through a memorable stay at his Grandmummy’s house in Jellicoe Junction, in One Flew Over the Banyan Tree readers meet loveable and unforgettable characters like Bellakay, the walking encyclopedia; Salgado, a droll glutton; Sonny, owner of the illegal dilapidated restaurant called Nameless; “breakfast-eaters” who enjoy a good session of camaraderie and banter at the illicit eatery; an anthropomorphic canine who ruminates on the human race; headless ghosts who hover above the town’s beloved banyan tree; and many other captivating personalities.

No longer belonging to a functional family, Rohan must come to terms with his transformation into an independent young boy during his surreal stay in impoverished Jellicoe Junction, a lively hub in the island’s capital city – Portopo. After experiencing many perspectives and personalities, will he learn to forgive and transcend — or will he blend into the pauperized place he’s found himself situated in?

The past comes alive in One Flew over the Banyan Tree as generational and class conflicts intensify in the wake of 1960’s counterculture. With great heart and humor, Jansen’s debut is a gripping exposition of the far-reaching impact of British colonization, the ongoing disparities of destitution, and one young boy’s navigation of divided loyalties and decisions that will change the course of his life forever.

In One Flew over the Banyan Tree, Jansen draws inspiration from the wit of O. Henry, the clandestine world-building of Roald Dahl, and the comical storytelling of P.G Wodehouse. This book is a delight for fans of historic fiction, those who enjoy deep character development, and anyone spellbound by the characteristics of post-colonialism.

Alan Jansen was born and raised in British Colonial Ceylon (later Sri Lanka). He studied at the renowned St. Joseph's College in Colombo and currently lives in Stockholm, Sweden after emigrating there as a young man. Giving up a long-time senior position in a Swedish telecom company, Alan decided to concentrate on a writing career. One Flew over the Banyan Tree is his first novel.