Celebrating The Hardcover Release With a USA Giveaway of:


THE LAST WOMAN IN THE FOREST 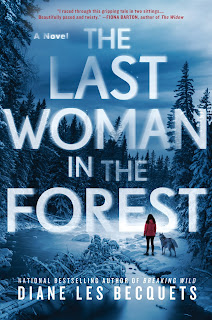 In 2016, Diane Les Becquets burst onto the scene with her bestselling debut novel, Breaking Wild, which Tana French called “a powerful, visceral book about the incredible human capacity to transcend the limitations imposed by our own pasts and our own fears.”  A gifted storyteller with a talent for describing little-known landscapes in North America’s vast wilderness that she has hiked herself, Les Becquets combined dramatic suspense with her love of the outdoors, and readers of every kind of fiction raved about her first novel.

Diane Les Becquets is back with THE LAST WOMAN IN THE FOREST (Berkley Hardcover; March 5, 2019), a thriller about a woman who fears that the man she loved may have been a serial killer. Combining her love of nature and wildlife conservation, her personal horrific experience with assault, and her interest in the real-life unsolved Connecticut River Murders of the 1980s, Les Becquets has delivered a novel of suspense that will haunt readers until the last page.
************
Praise for THE LAST WOMAN IN THE FOREST:

“[An] elegantly written thriller…the story revs up, providing more than enough tension and suspense as Marian inches closer to the dangerous and disturbing truth. Eloquent, detailed descriptions of nature and of rescue dog training, survival techniques, and the peripatetic life of conservationists enrich the narrative.”
—Publishers Weekly

“The intricately woven, atmospheric story will keep readers wondering until the end.”—Booklist

“I raced through this gripping tale in two sittings, only pausing to admire the stunning views of the snowy wilderness. Beautifully paced and twisty.”
—Fiona Barton, New York Times bestselling author of The Widow

“The Last Woman in the Forest is Diane Les Becquets at her best: unflinching and terrifying, yet buoyed by hope and love. This novel scared me, and it continues to scare me, but that didn’t stop me from racing through it. No one writing today has so connected the threats in our natural world to the threats in our emotional lives as well as Les Becquets has. This is a powerful novel, and a story I won’t forget.”
—Wiley Cash, New York Times bestselling author of The Last Ballad

“A taut, well-crafted thriller that pulls readers in from the very first page and keeps them guessing until the very last. All this, while also illuminating universal truths about intuition, trust, and love.”
—John Searles, New York Times bestselling author of Help for the Haunted
***********
About The Book:

In THE LAST WOMAN IN THE FOREST, Marian Engström has found her true calling: working with rescue dogs to help track and protect endangered wildlife. Her first assignment takes her to northern Alberta, where she falls in love with her mentor, the daring and brilliant Tate. But after a tragic accident leaves him dead, Marian discovers growing and disturbing inconsistencies about Tate’s life.  She begins to wonder if the man she loved could have been responsible for the unsolved murders of at least four women.  Desperately hoping to clear Tate’s name as a serial killer, she reaches out to a retired forensic profiler who is still haunted by the open cases. As she circles ever closer to the truth with his help, she cannot shake the feeling that she is being watched and that danger lurks around every corner of the forest.

Set in the wilderness landscapes of Alberta, Montana, Idaho, Utah, and northeastern Washington, THE LAST WOMAN IN THE FOREST is a thriller about one woman’s quest to find a killer—even if it turns out to be the man she loved.
**********
About the Author: 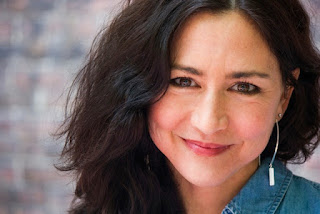 Photo Credit:  Nathaniel Boesch
****************
Les Becquets was once married to a forester who told her about the Connecticut River Murders of the 1980s: at least six women were stabbed and killed along the Vermont and New Hampshire border.  The killer was never found. The stories of these women affected the author as she remembered her own assault: being held at knifepoint for 12 hours in a trailer when she was eighteen, an ordeal she narrowly escaped from with her life.  One harrowing scene in the THE LAST WOMAN IN THE FOREST is based on this very personal experience.

In preparing to write THE LAST WOMAN IN THE FOREST, Les Becquets sought out criminal profiler and author of several books, John Philpin, who had assisted law enforcement on the real Connecticut River murder cases as well as 200 others during his incredible career.

She learned about the predatory nature and beliefs of psychopathic killers with his help—even modeling the fictional profiler in her novel after Philpin himself.  Les Becquets also took care to highlight an important topic in our current zeitgeist: women, as strong or capable as they are, do not enjoy the same freedoms as men when it comes to enjoying the solitude of nature, a prominent theme in the book.

OUR WINNER IS:  CHERIE FROM OHIO

THANK YOU TO EVERYONE WHO STOPPED AND WHO ENTERED.

I am partnering with Diana Franco of Penguin Random House for this giveaway: