The Girl From The Channel Islands by Jenny Lecoat

Hedy left Vienna for the Channel Islands to escape German Occupation during WWII, but her safety is in jeopardy since the Germans are now occupying this British territory.

While settling in, Hedy has kept her identity hidden, but when they were questioning residents, the Germans found out she was Jewish.

Since Hedy speaks both English and German, she keeps herself safe or safe for the most part by working as a translator in the German offices.  Only the hiring officer knows she is Jewish.

She is always in danger of being discovered and deported to the concentration camps since she works with the German officers, and someone is always ready to reveal information.

While working there, Hedy falls in love with a German officer causing danger for both of them.  Will their love survive?

THE GIRL FROM THE CHANNEL ISLANDS is based on true events and has tension throughout especially because you are amazed at how Hedy kept herself under the radar.

I didn't know of this occupation, deportation of the citizens of Jersey by the Germans, or Churchill's ignoring of this territory.

Ms. Lecoat did a marvelous job of describing events, feelings, and the hope and desperation the residents of the Channel Islands lived with. 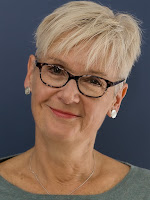 Jenny Lecoat was born in Jersey, Channel Islands, where her parents were raised under German Occupation and were involved in resistance activity.

Lecoat moved to England at 18, where, after earning a drama degree, she spent a decade on the alternative comedy circuit as a feminist stand-up.

She also wrote for newspapers and women's magazines (Cosmopolitan, Observer), worked as a TV and radio presenter, before focusing on screenwriting from sitcom to sketch shows.

A love of history and factual stories and a return to her island roots brought about her feature film Another Mother's Son (2017).

She is married to television writer Gary Lawson and now lives in East Sussex.

The Girl from the Channel Islands is her first novel.