Spotlight of Shutter by Melissa Larsen

Suspense, horror, power, control, voyeurism, and sexual politics all blend together in a tale that’s deliciously creepy with what Publishers Weekly has called a “knockout punch of a surprise ending.”

Already named by Bustle and Barnes & Noble’s blog as one of their most anticipated debuts of 2021, Melissa Larsen proves to be a compelling new voice in suspense fiction.
Berkley Trade Paperback Original; June 15, 2021
************
PRAISE FOR SHUTTER: 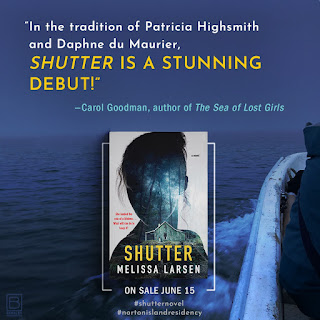 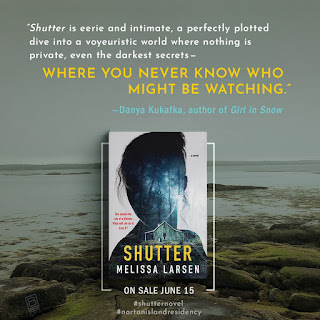 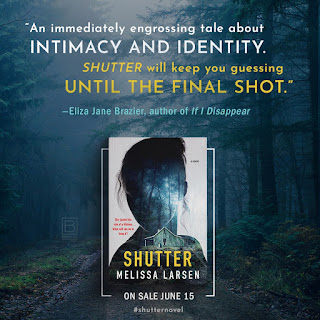 In the wake of her father's death, Betty doesn't allow herself to mourn. Instead, she pushes away her mother, breaks up with her boyfriend, and leaves everything behind to move to New York City crashing on her old friend Sophia and Sophia’s boyfriend Ben’s, couch. Sophia and Ben introduce Betty to their friend and indie filmmaker darling Anthony Marino, whose previous movie is a favorite of Betty’s. She starstruck by Anthony and, while slightly afraid of him, completely captivated by him as well. When he offers her the chance to play the leading role in his latest project, a loose re-make of Cape Fear, she jumps at the opportunity.

The four of them head to Anthony’s family’s cabin off the coast of Maine for several weeks to shoot the film. Betty starts to get more apprehensive about what she’s gotten herself into. She continuously finds herself pulled under Anthony’s alluring spell, but there’s no real script, or at least one that Betty’s not privy to. Anthony gives her a new identity, Lola, and a radical makeover to fit the part. But Betty tells herself that this is exactly what she's been looking for: the chance to reinvent herself. That is, until she meets Sammy, the island’s caretaker, and Betty realizes just how little she knows about the movie and its director and is certainly in over her head.

Melissa Larsen has an M.F.A. from Columbia University and a B.A. from NYU’s Gallatin School of Individualized Study.

She has interned and worked extensively in publishing. She lives in San Francisco, and Shutter is her first novel.