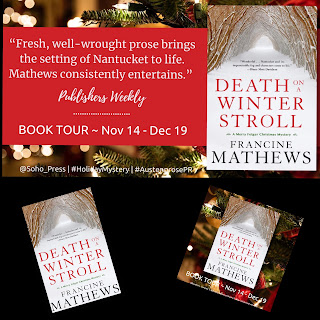 PRAISE FOR DEATH ON A WINTER STROLL:

“This fast-moving mystery packs in a lot, but never too much, and will work for fans of coming-of-age stories, police procedurals, and romance.” —First Clue

“Mathews consistently places relationships at the forefront of her mysteries, and Merry's unique blend of tenacity and humanity makes her a heroine to root for.”—USA Today bestselling author Karen Odden, author of the Inspector Corravan mysteries

EXCERPT OF DEATH ON A WINTER STROLL:

Death on a Winter Stroll Expert 1

The first weekend of December had been Meredith Folger’s favorite time of year for as long as she could remember. People often say that about holiday traditions, of course, but Merry was convinced that nowhere on earth was the winter solstice heralded with such enthusiastic conviction as during the three days of Nantucket’s Christmas Stroll.

Anticipation started to rise all over the island in late November. The day after Thanksgiving, crowds gathered at the head of Main Street for the ceremonial lighting of the massive ever- green tree that shed its glow throughout the darkest hours of the year; the following weekend, Santa would arrive at the end of Straight Wharf by Coast Guard cutter.

Waving from the back of an antique fire truck, he’d follow the Town Crier and a drum section of grade-school kids who’d been practicing with Ms. Benton the music teacher for weeks, parading up from the harbor and winding through town.

Everybody standing on the curb—islanders, tourists, daytrippers—would fall in behind and follow the truck with guttural cheers. Eventually Santa would be enthroned next to the lighted town tree and take requests from a long line of children.

This was what gave Christmas Stroll its name. It had been going on for half a century now, and although imitated by towns all over New England, Nantucket’s weekend remained unrivaled.

People who loved the island arrived each year by land and sea, from all over the country and the world, to celebrate.

Over time the holiday had morphed into three full days of permission to wander amiably around town with steaming cups of cheer and weird hats, bells jangling from the ankles of elf booties.

Over ten thousand tourists crowded the sidewalks of downtown. The shops and restaurants were full. People laughed freely and called jokes to friends across the brick sidewalks and paused in the middle of the morning to sit on available benches.

They bought things they didn’t need, simply because they wanted them, then gifted them to others without a thought.

A few of them found someone to kiss. They jostled each other good-naturedly, butting armfuls of colorful bags, as they trailed down the streets in their red and green Stroll scarves.

In lucky years, it snowed.

In less fortunate ones, it rained.

This year, the forecast was for Windy and Gorgeous.

Uniformed members of Merry’s police force would be up early and out on Main Street Saturday morning with sawhorses, barricading the heart of town against vehicular traffic. They’d stand in the crosswalks and near the sundial planter that sat right in the middle of the cobble stoned street.

The Garden Association decorated the urn each year with fresh greens and red bows and tiny white lights. The police were there to maintain order and most of the Strollers were orderly, except for the occasional drunken jerk who vomited without warning on the uneven brick side- walk. Merry had observed the rhythms of Stroll her entire life, she reflected, and usually it never got old.

This year, she barely had time to care.

This year, she wasn’t merely another happy reveler hiding mysterious boxes on the top shelf of the spare bedroom’s closet, the scent of vanilla and cloves in her hair.

She wasn’t pausing to rub pine or spruce branches on her early morning walks, so that the resinous oil lingered on her fingertips, or losing track of time while she snapped pictures of festive window boxes.

This year, she was the Nantucket Police Department’s chief of police. And Christmas Stroll, to be completely honest, was shaping up to be a royal pain in the ass.

From Death on a Winter Stroll © 2022, Francine Mathews, published by Soho Crime

ABOUT DEATH ON A WINTER STROLL:

Nantucket Police Chief Meredith Folger is acutely conscious of the stress COVID-19 has placed on the community she loves.

Although the island has proved a refuge for many during the pandemic, the cost to Nantucket has been high.

Merry hopes that the Christmas Stroll, one of Nantucket’s favorite traditions, in which Main Street is transformed into a winter wonderland, will lift the island’s spirits.

But the arrival of a large-scale TV production, and the Secretary of State and her family, complicates matters significantly.

The TV shoot is plagued with problems from within, as a shady, power-hungry producer clashes with strong-willed actors.

Across Nantucket, the Secretary’s troubled stepson keeps shaking off his security detail to visit a dilapidated house near conservation land, where an intriguing recluse guards secrets of her own.

With all parties overly conscious of spending too much time in the public eye and secrets swirling around both camps, it is difficult to parse what behavior is suspicious or not—until the bodies turn up.

Now, it’s up to Merry and Detective Howie Seitz to find a connection between two seemingly unconnected murders and catch the killer. But when everyone has a motive, and half of the suspects are politicians and actors, how can Merry and Howie tell fact from fiction?

This latest installment in critically acclaimed author Francine Mathews’ Merry Folger series is an immersive escape to festive Nantucket, a poignant exploration of grief as a result of parental absence, and a delicious new mystery to keep you guessing.

Francine Mathews was born in Binghamton, New York, the last of six girls.

She attended Princeton and Stanford Universities, where she studied history, before going on to work as an intelligence analyst at the CIA.

She wrote her first book in 1992 and left the Agency a year later.

Since then, she has written thirty books, including six previous novels in the Merry Folger series (Death in the Off-Season, Death in Rough Water, Death in a Mood Indigo, Death in a Cold Hard Light, Death on Nantucket, and Death on Tuckernuck) as well as the nationally bestselling Being a Jane Austen mystery series, which she writes under the pen name Stephanie Barron.

She lives and works in Denver, Colorado.