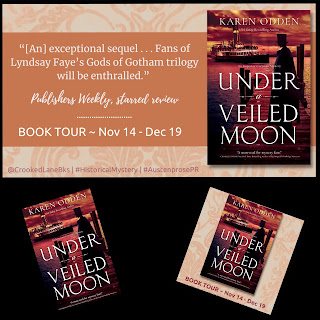 PRAISE FOR UNDER A VEILED MOON:

“Victorian skulduggery with a heaping side of Irish troubles.” —Kirkus Reviews

“Charismatic police superintendent Michael Corravan is back in a gripping sequel about the mysterious sinking of the Princess Alice. Odden deftly weaves together English and Irish history, along with her detective's own story, in a way that will keep readers flipping pages long into the night.”—Susan Elia MacNeal, New York Times bestselling author of Mother Daughter Traitor Spy and the Maggie Hope series.

ABOUT UNDER A VEILED MOON:

In the tradition of C. S. Harris and Anne Perry, a fatal disaster on the Thames and a roiling political conflict set the stage for Karen Odden’s second Inspector Corravan historical mystery.

September 1878.  One night, as the pleasure boat the Princess Alice makes her daily trip up the Thames, she collides with the Bywell Castle, a huge iron-hulled collier.

The Princess Alice shears apart, throwing all 600 passengers into the river; only 130 survive.

It is the worst maritime disaster London has ever seen, and early clues point to sabotage by the Irish Republican Brotherhood, who believe violence is the path to restoring Irish Home Rule.

For Scotland Yard Inspector Michael Corravan, born in Ireland and adopted by the Irish Doyle family, the case presents a challenge.

Accused by the Home Office of willfully disregarding the obvious conclusion and berated by his Irish friends for bowing to prejudice, Corravan doggedly pursues the truth, knowing that if the Princess Alice disaster is pinned on the IRB, hopes for Home Rule could be dashed forever.  Corrovan’s dilemma is compounded by Colin, the youngest Doyle, who has joined James McCabe’s Irish gang.

As violence in Whitechapel rises, Corravan strikes a deal with McCabe to get Colin out of harm’s way.

But unbeknownst to Corravan, Colin bears longstanding resentments against his adopted brother and scorns his help.

As the newspapers link the IRB to further accidents, London threatens to devolve into terror and chaos.

With the help of his young colleague, the loyal Mr. Stiles, and his friend Belinda Gale, Corravan uncovers the harrowing truth—one that will shake his faith in his countrymen, the law, and himself.

EXCERPT OF UNDER A VEILED MOON:

Under a Veiled Moon Excerpt 1

I knocked twice and inserted my key in the lock.

Even as I did so, I heard the twins, Colin and Elsie, their voices raised as they talked over each other—Elsie with a sharp edge of frustration, Colin growling in reply. Odd, I thought as I pushed open the door. Since they were children, they’d baited each other and teased, but I’d never known them to quarrel.

Colin sat in a kitchen chair tilted backward, the heel of one heavy boot hooked over the rung. He glared up at Elsie, who stood across the table, her hand clutching a faded towel at her hip, her chin set in a way I recognized.

Both heads swiveled to me, and in unison, they muttered, “Nothing.”

They could have still been five, caught spooning the jam out of the jar Ma hid behind the flour tin. Except that under the stubble of his whiskers, there was a puffiness along Colin’s cheek that appeared to be the remnants of a bruise.

Colin thunked the front legs of the chair onto the floor and pushed away from the table.

“I got somethin’ to do.” He took his coat off the rack—not his old faded one, I noticed, but a new one—and stalked out the door, pulling it closed behind him.

I raised my eyebrows and turned to Elsie. She grimaced. “He’s just bein’ an eejit, like most men.” Her voice lacked its usual good humor; she was genuinely angry.

“Went down to the shop for some tea.” She stepped to the sideboard and moved the kettle to the top of the stove. The handle caught her sleeve, pulling it back far enough that I caught sight of a white bandage.

“Did you hurt your wrist?”

She tugged the sleeve down. “Ach, I just fell on the stairs. Clumsy of me.”

The broken window and Colin’s abrupt departure had been enough to alert me to something amiss. Even without those signs, though, I wouldn’t have believed her. I knew the shape a lie took in her voice.

Her back was to me, and she spoke over her shoulder. “It’s nothing, Mickey.”

I approached and took her left elbow gently in mine to turn her. “Let me see.”

Reluctantly, she let me unwrap the flannel. Diagonal across her wrist was a bruise such as a truncheon or a pipe might leave, purple and yellowing at the edges.

I looked up. “Who did this?” My voice was hoarse.

Her eyes, blue as mine, stared back. “Mickey, don’t look like that. It was dark, and I doubt he did it on purpose.”

“I don’t know! I was walking home from Mary’s house on Wednesday night, and before I knew it, twenty lads were around me, fightin’ and brawlin’, and I jumped out of the way, but one of them hit my wrist, and I fell.”

“What were you doing walking alone after dark? Where was Colin?”

She gave a disparaging “pfft.” “As if I’d know. Some nights he doesn’t come home until late. Or not at all.”

I cast my mind back to my own recent visits. Colin had often been absent, partly because he’d been working on the construction of the new embankment, but that had ended in July. So where was he spending his time now? And where had he earned the money for his new coat?

We both heard Ma’s footsteps on the inside stairs.

“Don’t tell Ma,” Elsie said hurriedly, her voice low. The bandage was completely hidden by her sleeve. “She has enough to worry about. Swear, Mickey.”

Even as I promised, I wondered what else was worrying Ma. But as the door at the top of the inner stairs opened, I had my smile ready.
Ma emerged, carrying a packet of tea from the shop. “Ah, Mickey! I’m glad ye came.”

Her face shone with genuine warmth, and she smoothed her coppery hair back from her temple. Her eyes flicked around the room, landing on Elsie. “Colin left?” The brightness in her expression dimmed.

“Just now,” Elsie replied. Their gazes held, and with the unfailing instinct that develops in anyone who grew up trying to perceive trouble before it struck, I sensed meaning in that silent exchange. But before I could decipher it, Elsie shrugged, and Ma turned to me, her hazel eyes appraising.

“You look less wraithy than usual.” She reached up to pat my cheek approvingly. “Elsie, fetch the preserves. I’ll put the water on.”

I went to the stove, tonged in a few lumps of coal from the scuttle and shut the metal door with a clang.

As Elsie sliced the bread, I filled the kettle and Ma took down three cups and saucers from the shelf.

The tension I sensed amid my family derived from something drifting in the deep current, not bobbing along the surface, driven by a single day’s wind and sun.

From Under a Veiled Moon © 2022, Karen Odden, published by Crooked Lane Books 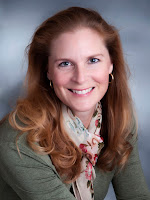 Karen Odden earned her Ph.D. in English from New York University and subsequently taught literature at the University of Wisconsin-Milwaukee.
She has contributed essays to numerous books and journals, written introductions for Victorian novels in the Barnes & Noble classics series and edited for the journal Victorian Literature and Culture (Cambridge UP).
Her previous novels, also set in 1870s London, have won awards for historical fiction and mystery.
A member of Mystery Writers of America and Sisters in Crime and the recipient of a grant from the Arizona Commission on the Arts, Karen lives in Arizona with her family and her rescue beagle Rosy.
WEBSITE | TWITTER | INSTAGRAM | FACEBOOK | BOOKBUB | GOODREADS

AN INTERVIEW WITH KAREN ODDEN: