The Opportunist by Elyse Friedman 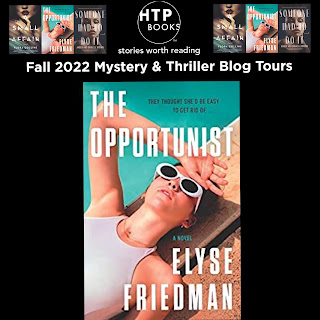 Which one of the Shropshires is the biggest opportunist and liar?

The choices are Kelly, Martin, Alana, Teddy, and Ed - the father.

What will they do to keep their father's fortune when Kelly the 28-year-old nurse to their father is going to marry him.  They know she only wants his money.

We meet all these characters on Ed Shropshire's West Coast Island retreat and ponder about which character is more devious than the other.

THE OPPORTUNIST is a bit confusing as it goes back and forth in time, but the wicked characters don't change in either time frame.

There unfortunately are some disturbing, shocking things revealed about a few of the characters that I never saw coming but are the "meat" and reason for what happens.

Could we say the worst "character" is money- the root of all evil?

I say yes, but I also picked out a character that I thought was the worst.

They all are despicable, but there was one in particular for me.

As the book came to a close, another surprise popped up, and I had to change my mind.

I will be curious which character you will choose as the most devious and cunning when you read this book.  4/5

This book was given to me by the publisher via Net Galley for an honest review.