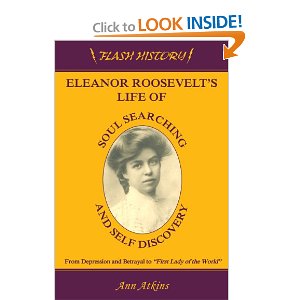 Just in time for Eleanor’s birthday on October 11.  :)

A childhood of neglect and a feeling of inadequacy is how Eleanor Roosevelt grew up.

Her marriage to her fifth cousin was no better for her self-esteem....Franklin Delanor Roosevelt was a womanizer with a mother who had control over him and also Eleanor.  Eleanor was a woman of the era in which she lived, and she live it well and the way a woman was expected to live even at her expense.  She was a powerful woman despite the way she had to live, and then she realized she could make a difference and came out of her shell to do remarkable things in history.  She thankfully is our history.

The book was very well researched....I learned many facts I was not aware of.   It was a splendid re-living of history for me.  I didn't know Eleanor was at the heart of the New Deal and many other programs....I must not have been paying attention in history class.  The beautiful photos also enhanced the story.
The author, Ann Atkins, asked if you want to order a book it is best to do it from her web site - better price, free shipping and some of the proceeds go to charity.