THE INSPIRATION FOR THE MINT JULEP MYSTERIES

I love what inspired Ms. Ramsey to write this series.

The Mint Julep Mysteries were inspired by my grandparents’ plantation home in Alabama. Wakefield, an 1832 Steamboat Gothic plantation home featured in many books and magazines, is now owned by my sister and her husband.

Think Murder She Wrote but with two formerly estranged, newly widowed Southern sisters who cannot cook and whom critics compare to Lucy and Ethel starring on a food show set on a plantation in Alabama. Spice it up with Rosemary and Thyme with an organic garden planted by the Cox County Master Gardeners around Waverly that inspires Victory Gardens around the country.

Mix in romance with the Saks Fifth Avenue quality gentlemen who attend the Five O’clock Mint Julep Hour on the Waverly veranda. Season with Newhart appeal as Palmer, former ghost town, now attracts outdoorsman from around the world to the best deer hunting in the world.

Add a dash of variety with a multicultural cast. Stir in the drug dealing serial killers upset with all that attention and a broad variety of heroes and villains and you have the Mint Julep Mysteries.

Complicate everything with genealogist Dabney’s genetic memory, the result of the accident where the SpedEx truck killed her husband of 35 years and left Dabney in a coma from which she emerged in tune with past events that intrude into the present.

Mint Julep Mysteries at times get a bit -- how shall I say -- bawdy. I decided to write it as I saw it. This is a multicultural view of the New South that I know, warts and all. You will run through a bar in the middle of the French Quarter, attend a Sons of Confederate Veterans meeting, follow a priest to a rendezvous, have Mint Juleps on the front veranda of an historic plantation home, and eventually travel back and forth in time in Guatemala.

I just hope no one asks me to tell the rest of the joke about the man taking the chicken to the movie! Dabney Palmer Rankin is a character readers find quirky and fun, often serious and thoughtful, confused by male relationships, sometimes floundering in a world without the husband she depended upon who finds support in the friends she never thought she'd find and a sister with whom she forges a new relationship. She is a friend you'd want to have and return frequently to visit.

The first two books, like any series, introduce the characters and set the scene, with lots of action and mysteries/murders to solve. They really build toward the third. I hope readers will just be prepared to enjoy the ride and meet some fascinating people.

I thought folks might be interested in the plantation house that inspired the mysteries so my sister and I collaborated on the history/cookbook. Recently, the etiquette page of my website: southern-style.com has gotten the most hits and inquiries so I added the primer on Southern manners and etiquette. 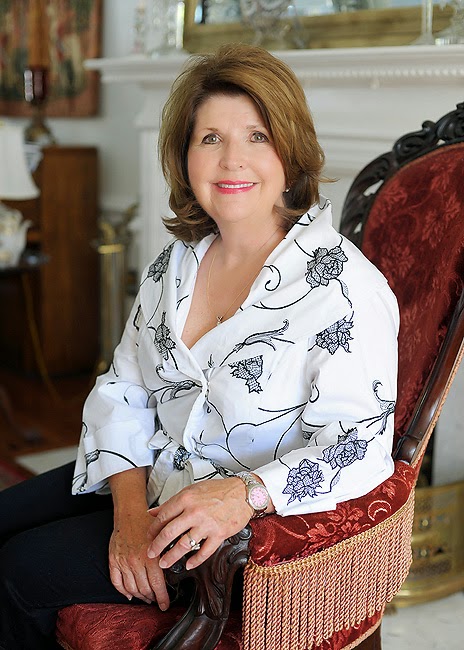 I WOULD LOVE TO MEET HER IN PERSON

Sharman Jean Burson received her BSE degree from the University of Alabama where she was a member of Delta Delta Delta sorority. She received her Masters degree from Troy University. She is a wife, mother, amateur genealogist, Master Gardener, teacher and sometime adjunct history professor, freelance writer, short story writer, karaoke singer, and webmaster for Southern-style.com, a general interest website. “Whatever I am generally interested in goes on the website.”

Ramsey also writes historical fiction under the name of Sharman Burson Ramsey -- a family saga published by Mercer University Press beginning with Swimming with Serpents and continuing with In Pursuit.

She divides her time between Dothan, Alabama, and Panama City, Florida, with her husband. Both she and her husband share an Alabama heritage, two daughters and a son, three granddaughters and two grandsons and a standard poodle.