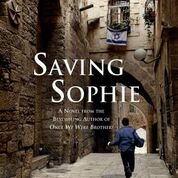 The author of ONCE WE WERE BROTHERS has a new book, and the publisher has a giveaway for us.


*********
ALL INFORMATION IN THIS POST OTHER THAN MY REVIEW LINK IS COURTESY OF THE PUBLISHER.

An Action-Packed, Unforgettable journey of murder and deception, testing the bonds of family and love

Jack Sommers was just an unassuming accountant from Chicago—until his wife passed away, his young daughter was kidnapped, and he became the main suspect in an $88 million embezzlement case. Suddenly Jack is on the run, hoping to avoid detection long enough to rescue his daughter, Sophie

Now Catherine Lockhart and her partner, Liam Taggart, must join forces once again, this time working with mysterious CIA operative to launch a secret mission that aims not only to recue Sophie but also thwart a major terrorist attack in Hebron. But will the ever-escalating violence of the Palestine-Israel region put their entire team at risk and end in catastrophe? Or can they overcome the odds and save countless lives—including their own?

Praise for ONCE WE WERE BROTHERS:

“As compelling a story as you would ever want to read…it will stay with you long after you have finished it.”—The Huffington Post

“Once We Were Brothers tells a great story…gripping.”—Chicago Tribune

“Uplifting and moving…[with] an unusual insight into human character and motivations. Highly recommended for all readers.”—Library Journal (starred review)

“The author describes the atrocities of wartime Poland and the beautiful, eternal romance between Ben Solomon and his wife, Hannah. Balson’s first novel is hard to put down.”—Jewish Book World

RONALD H. BALSON is a Chicago trial attorney, an educator, and a writer. His practice has taken him to several international venues. He is also the author of the international bestseller Once We Were Brothers.

An excerpt from my review:

"ONCE WE WERE BROTHERS is a powerful, well-researched first novel that will have you glued to the pages as Ben tells his story of hatred, horror, and the annihilation of his and other Jewish families during WWII."

“Solid… Balson succeeds in illuminating the personal side of the Middle Eastern conflict through his deeply human, psychologically credible characters.”—Publishers Weekly

“Strong, colorful, and constantly suspenseful…With its well-handled, vividly painted settings in and around Jerusalem and Hebron, Hawaii, and Chicago, Saving Sophie will keep readers engaged from first to last. And educated, too. (It’s generously stocked with supplementary materials for reading groups.)”—Philip K. Jason, Washington Independent Review of Books

“Saving Sophie is a page turning read filled with despair and anger but with hope, love, and humanity at its core.”—Renita Last, Jewish Book Council

ONCE WE WERE BROTHERS:

“You won’t be disappointed…a new look at an old story, and it will stay with you long after you have finished it.” —Jackie K. Cooper, Huffington Post

“This novel is uplifting and moving, intelligently written and featuring historically accurate context and an unusual insight into human character and motivations.  Highly recommended for all readers.”—starred Library Journal

“The author describes the atrocities of wartime Poland and the beautiful, eternal romance between Ben Solomon and his wife, Hannah.  Balson’s first novel is hard to put down.”— The Jewish Book World

“Balson does a number of things superbly: he crafts a highly readable plotline and makes great use of the Chicago backdrop…many will enjoy this gripping novel for its narrative drive and its emotional storytelling.”—Booklist

Learn more about the author at: