I Know What I Saw by S.K. Sharp 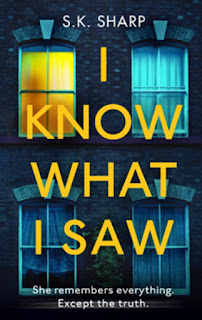 Nicola was gifted with an extraordinary memory, but was it a gift?

Things vividly popped up from her past with details that would have been totally forgotten by most.

​​After 37 years, a body is found, and Nicola is asked to remember what happened that night since her ex husband is accused.

He needs her for an alibi.​​  She is not sure her recollection will free him, but she told what she remembered whether the police believe her or not.

​​I KNOW WHAT I SAW went back and forth from Nicola’s life as a teenager to today’s investigation.​​

The book was actually a bit confusing as to who the characters were and how they were related.​​

The story line was good, but it would have been better had it not dragged out so much even though the background information was necessary. ​​

Hinting that Nicola didn’t tell everything to the police kept me going along with wanting to know what really happened to Declan’s father that night and who the killer was.​​

​​I still can’t give it a higher rating even though it got good around 80%.