Spotlight of The Mourning Report by Caitlin Garvey 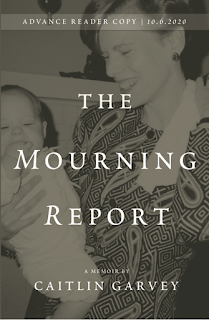 BY CAITLIN GARVEY
************
Information in this post is courtesy of Rachel Palmer of Mindbuck Media.
***********
Debut author Caitlin Garvey’s memoir, The Mourning Report is out on October 6th.
Two years after her mother’s death from breast cancer, Caitlin, then 20 years old, was admitted to a psychiatric facility after a suicide attempt. In the wake of this enormous loss, Caitlin questions her religion, comes to terms with her sexuality, and searches for a way to live with severe depression and anxiety.
Filled with imagery, vulnerability and depth, the succinct memoir honestly and gracefully unpacks a trifecta of trauma.
***********
ADVANCED PRAISE:

“Titled a report—sly and straightforward in its nomenclature—Caitlin Garvey's memoir is also a testimony. It attests to grief as a veil, and to the ravages of loss. At eighteen, Garvey lost her mother and subsequently herself. With candor and vulnerability, she writes to retrieve the Lost Child she's become. The result is a book of heartrending tenderness.”
—Peggy Shinner, author of You Feel So Mortal

I think I would rather be one of those ice-road truckers, performing under life-threatening physical conditions and measuring success through survival, than have a career as a hospice nurse. I’d rather experience the cold highway hypnosis of the Arctic Circle, trucking my heavy cargo over a thin layer of ice that was never meant to be a road, than stand near the bed, with all those tubes in that master bedroom when the wife’s face distorts from horror as she holds her husband’s hand and realizes, for the first time in her life, what it means for a body to grow cold.

Years later, unable to come to terms with her mother’s death, Caitlin decides to embark on a “grief journey,” interviewing the people involved in her mother’s dying process: a hospice nurse, a priest, an estate planner, a hairstylist, and a funeral director.

If she figures out how they could function after being so close to her mother’s death, then maybe she can learn how to navigate her own life.

Each chapter of The Mourning Report is centered on each interview and the memories, anxieties, and reflections that is stimulated. It asks what it means to “move on.

Garvey captures the story of her mother’s life by weaving together the oral history of those that knew her at the end. That is the situation, the story is Garvey’s journey as she searches for meaning and self acceptance.

The Mourning Report is an incisive and emotional look into the truth of what is left behind after loss. 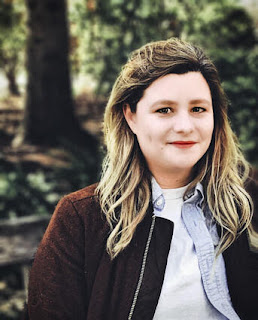 Caitlin Garvey is a Chicago-based writer and English professor. She has an MFA from Northwestern University and an MA in English Literature from DePaul University. Her nonfiction has been nominated for multiple awards, including The Pushcart Prize.