Spotlight, Exclusive Excerpt, and Review of The Hidden Child by Louise Fein 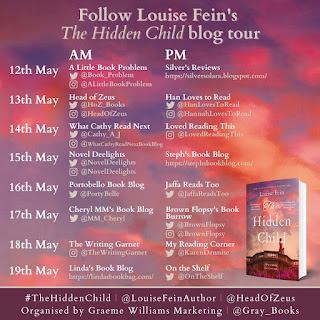 LOUISE FEIN
************
ALL INFORMATION OTHER THAN THE REVIEW IN THIS POST IS COURTESY OF GRAEME WILLIAMS OF GRAEME WILLIAMS MARKETING - THE REVIEW IS MINE.
*************
*An International Bestseller from the author of People Like Us, shortlisted for the RSL Christopher Bland Prize and the RNA Historical Romantic Novel Award 2021*
From the outside, Eleanor and Edward Hamilton have the perfect life, but they're harbouring a secret that threatens to fracture their entire world.
The Hidden Child is an international bestseller, and an excellent novel about love, motherhood, human frailty and redemption.
************

PRAISE FOR THE HIDDEN CHILD:

'Shocking, emotive, and compelling, but ultimately a story of hope' – Deborah Carr, bestselling author of The Poppy Field

EXCLUSIVE EXCERPT OF THE HIDDEN CHILD:

Mabel grips Eleanor’s arm tight as they bowl fast along the country lane, Dilly’s hooves kicking dust into sultry July air. Limbs of the trees which stand like sentries beside the lane reach out and curl above them, joining like the high arches of a cathedral to form a cool green canopy, shading the little pony and trap and its occupants from the fierce heat of the afternoon sun.

‘Faster!’ giggles Mabel, glancing up at her mother with sparkling eyes. ‘Make Dilly go faster!’ She turns back to look at the road, laughing with glee as the wind lifts her curls, almost translucent where the sunlight catches them, her little bottom bouncing with excitement on the seat beside her mother.

Eleanor steadies the reins in her hands. There is a creak of leather and the faint tang of equine sweat. The pony is trotting fast enough for this heat. Besides, they are plenty early enough to meet the 4.25 from London.

‘Dilly can’t go any faster, Mabel,’ Eleanor answers. ‘It’s too hot. And besides, she’s quite old now, so it wouldn’t be fair.’ Dilly’s chestnut sides are darkening with sweat, but she maintains her fast pace, pulling eagerly against Eleanor’s hands; ears pricked, head raised, as though she is as elated as Eleanor at the thought of Rose coming home. Happiness swells as she thinks of her sister’s reaction when she shares her news.

News even Edward doesn’t know yet.

Mabel pouts and drops Eleanor’s arm. ‘How old is Dilly?’ ‘Around thirteen, I believe.’ ‘Is that old?’ ‘Middle-aged for a pony, I should think.’
‘How old are you, Mama?’

Eleanor laughs. ‘You should never ask a lady her age, Mabel.’ She leans down and kisses the top of her daughter’s head. ‘But, as it’s you, I’ll tell – as long as you keep it a secret between us,’ she says, tapping the side of her nose, keeping her expression stern.

‘I’m twenty-seven. Actually, almost twenty-eight,’ she adds in surprise. How did she get to be so old? She was twenty only last year, or so it feels. And why does twenty- eight sound so much older than twenty-seven? Thirty is just around the corner, she realises, with a sinking feeling. Is thirty old for a woman? A man of that age is considered to be just entering his prime of life, but a woman...

Beside her, Mabel lets out a little gasp. ‘That’s so old! Will you die soon, like Patch? You won’t die, will you, Mama?’

‘Goodness me, no! People live much longer than dogs, and ponies, darling. I’m really very, very young for a person.’

‘Aunt Rose is only eighteen, soon to be nineteen,’ Eleanor says, ‘and now that she is suitably educated, well- travelled and polished into a smart young lady, your papa is rather keen to find her a nice, rich husband.’ She bites her lip. Too much. Such things tend to be regurgitated by her daughter, usually to the wrong person. She glances down at Mabel’s countenance. She seems firmly focused on the road ahead. The little girl is completely still, presumably contemplating whatever age-related questions that go on in a four-year-old’s mind. She looks pretty as a picture in her Sunday-best cream dress, decorated all over with tiny yellow and pink flowers. Eleanor had agreed with Mabel earlier that it was just the thing to greet Aunt Rose from the station in.

Mabel shifts and looks up at Eleanor. There’s a darkness in the little girl’s eyes. She has noticed this a few times before. So imperceptible, she wonders if it’s her imagination. In a flash it’s gone and Mabel’s face lights up.

Eleanor takes a deep breath, and along to the rhythm of Dilly’s clip-clop on the lane, she begins to sing and sway, Mabel quickly joining in with the swaying and the chorus:

Eleanor can’t remember all the words, or the order of them, so she makes some up. Mabel doesn’t seem to mind and joins in happily, singing tunelessly at the top of her voice. Dilly twitches her ears back and forth.

REVIEW OF THE HIDDEN CHILD:

Secrets….Edward Hamilton has one and now he and his wife have one.

The secret they share together is that their daughter has epilepsy.  He has to hide it because he is in charge of a study of eugenics and is on the committee for Great Britain’s educational system.

It was sad hearing they were ashamed their daughter had epilepsy and kept her hidden from everyone. The treatment back then was awful, and my heart was broken for Mable.

My heart broke for Eleanor too, and I didn’t like Edward or trust him.  All he cared about was his image and his job.

We follow the family as they move through their days worrying about Mabel and as a new baby arrives.

The chapters where epilepsy speaks was unique and very interesting to have that in the book.

I enjoyed the chapters about Eleanor more than the ones that featured Edward and The International Congress of Eugenics.  The information about this Congress was very distressing and I never knew about it.

THE HIDDEN CHILD hit home about the epilepsy because my brother has epilepsy, and I remember how frightening it was when he had a seizure.

The book is well written and well researched with many ethical issues being addressed as well. 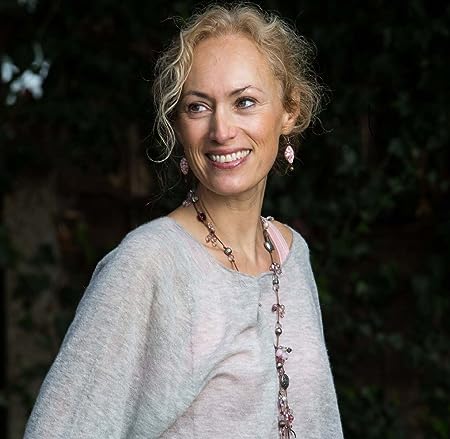 Louise Fein was born and brought up in London.

She harboured a secret love of writing from a young age, preferring to live in her imagination than the real world.

After a law degree, Louise worked in Hong Kong and Australia, travelling for a while through Asia and North America before settling back to a working life in London.

She finally gave in to the urge to write, taking an MA in creative writing, and embarking on her first novel, Daughter of the Reich (named People Like Us in the UK and Commonwealth edition).

The novel was inspired by the experience of her father's family, who escaped from the Nazis and arrived in England as refugees in the 1930's. Daughter of the Reich/People Like Us is being translated into 11 foreign languages, has been shortlisted for the 2021 RSL Christopher Bland Prize, the RNA Historical Novel of the year Award 2021 and long listed for the Not The Booker Prize 2020.

Louise's second novel, The Hidden Child, was published in the Autumn of 2021. Louise lives in the beautiful English countryside with her husband, three children, two cats, small dog and the local wildlife who like to make an occasional appearance in the house. Louise is currently working on her third novel.

For more information, go here and sign up to Louise's newsletter.

She also posts regularly to her BLOG

**AUTHOR INFORMATION AND PHOTO TAKEN FROM THE AUTHOR'S AMAZON PAGE**