The Homewreckers by Mary Kay Andrews 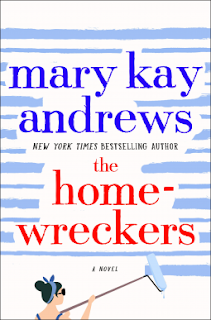 Hattie Kavanaugh has been renovating old houses since was eighteen, but the one she currently was renovating with her father-in-law was one she couldn't handle or afford.

She had to stop the project and sell.

The day before she gave up, Mo appeared.

He was a television producer who wanted to film her from the minute she stepped onto the property of the fixer upper, during the renovation, and when the fix up was finished.

She resisted his offer at first, but realized she had to take it.

After selling the money-pit house, Hattie had to find another fixer upper for next to nothing because she had next-to-no money. She luckily found one and bought a condemned property sight unseen.

She really did buy a lemon of a house, but that wasn't the only problem she encountered.  She definitely got herself into more than a home restoration.

She and her crew found things in the condemned property that gave clues to a twenty-year-old unsolved missing person/murder investigation.

This setback didn't stop her.  You will love Hattie and her resilience and strength.

Ms. Andrews certainly knows how to write a great story.

Fans of mystery, fans of books you won’t want to stop reading, and fans of Ms. Andrews' books will love THE HOMEWRECKERS.

Another gem that is a perfect read for summer or any season - don’t miss it. 5/5