The Italian Daughter by Soraya Lane 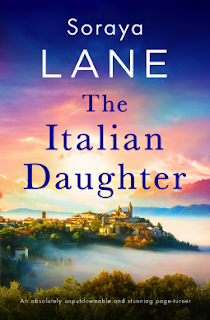 My grandmother was a ballerina in La Scala, and I am in Italy making wine and enjoying the vineyards?

We meet Estee in 1937 and Lily present day as Lily tries to find about her family's past.

She had some clues from a box she received that was addressed to her grandmother found at a home for unwed mothers.

And…how is she going to find out anything about her grandmother with the few clues she has from the box...a recipe for a chocolate dessert and the name of a theater, La Scala Academy.

When Lily went to Italy and stopped in a bakery with the recipe, the recipe definitely caused a stir when she showed it to the owner of the bakery.

In fact, the owner was furious that Lily had a copy of this recipe that she said has been kept secret for decades.

Want to find out the connection between the recipe, the bakery owner, and La Scala and why the bakery owner was not happy?  THE ITALIAN DAUGHTER has all the answers for you.

Loved it….you will cheer and cry along with the characters. 5/5

This book was given to me by Bookouture via NetGalley for an honest review.