A Lonely Death by Charles Todd 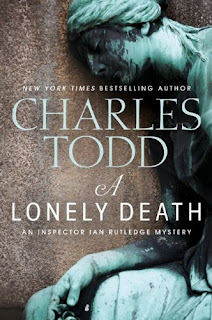 Three murders in a small town....Scotland yard is involved....all the same method of murder, but no weapon and no clues.  The townspeople are terrified about who will be next especially since there is really no connection between the men who were murdered. The only similar thread is the victims were alone or in an isolated area and had been officers in the armed forces during WWI, and they all had identification discs in their mouths from other dead soldiers.


Scotland Yard's, Ian Rutledge, was coming up short with all clues and interviews.   Everything turned up a dead end.  Mrs. Saunders, the ever-present lady in the window, can't even help him even though she said she sees everything no matter what time of the day or night.
As events begin to unfold, and the characters become alive from all the great detail, the story turns to page-turning status with its twists and turns and sub plots.
This was my first Ian Rutledge Mystery....Rutledge is a character you want to know better.   The beginning pages were a little confusing trying  to get all the characters straight....especially figuring out who Hamish was, but once you had everyone sorted out and the plot continued...wham...it was difficult to put down.

I definitely will be reading more of these mysteries....superb author.  Ohhhhhhhhhhh....I did enjoy it a lot.  5/5