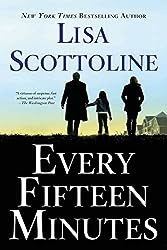 EVERY FIFTEEN MINUTES
By Lisa Scottoline
***************
Listen to the excerpt at the URL below to see if you want to enter the giveaway.

You can enter the giveaway on EVERY blog.


I hope these are the best 15 minute-time slots of your day!!!

I will choose the winner during my time slot, and you will know who the winner is instantly on April 14.  :)

Tom Fortez is a psychiatrist with a successful private practice and a loving wife and daughter. He’s held in high esteem at the prestigious psychiatric hospital and on the national book-and-lecture circuit. One of his most complex patients is Mike Browning, a brilliant but disturbed young man who has begun to exhibit violent delusions directed at the employees of the insurance company from which he was recently fired. He’s particularly focused on a young woman who spurned his advances, and he’s made statements about her in his therapy sessions that make Tom concerned for her safety. Tom is struggling to decide whether to breach the confidentiality of his patient (thus thwarting his efforts at treatment) by going to the police when Browning goes missing. And then the woman in question is found raped and murdered in her apartment complex. Tom immediately goes to the police to report what he knows, and suddenly finds himself in the headlines, the target of scorn and anger throughout the community. The nightmare only gets worse when Browning takes hostages at the insurance company. As Tom investigates on his own he finds clues that Browning may not have committed the rape and murder, and he must hurry to solve the murder and stop Browning from killing any hostages before time runs out.

"Scottoline knows how to keep readers in her grip."
—The New York Times Book Review

LISA SCOTTOLINE is a New York Times bestselling and Edgar Award–winning author of twenty-one novels. She has served as President of Mystery Writers of America, and she is a weekly columnist for the Philadelphia Inquirer. Her columns have been collected in four books and optioned for television. She has 30 million copies of her books in print in the United States, and she has been published in thirty countries. She lives in the Philadelphia area with an array of disobedient pets.

GEORGE NEWBERN is a film and television actor best known for his roles in Father of the Bride and Scandal. A prominent voice-over performer and award winning narrator, Newbern’s previous audiobook credits include several novels by Carl Hiaasen and Seabiscuit by Lauren Hildebrand, among others.