What She Ate Giveaway and Spotlight 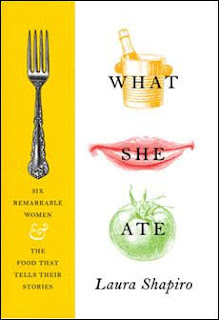 ***********
All information in this post is courtesy of the publisher.
***********
A beloved culinary historian’s short takes on six famous women through the lens of food
WHAT SHE ATE
Six Remarkable Women and the Food That Tells Their Stories
by
LAURA SHAPIRO
***********
PRAISE FOR WHAT SHE ATE:
Recommended Summer Reading by ELLE, Bon Appétit, and Eater.
“A unique and delectable work that sheds new light on the lives of women, food, and men. .”—Kirkus Reviews
“…six crisply written, ardently researched, and entertainingly revelatory portraits of very different women with complicated relationships with eating and cooking…. A bounteous and elegant feast for hungry minds.”—BookList, Starred Review
“Establishes Laura Shapiro as the founder of a delectable new literary genre: the culinary biography.”—Megan Marshall, Pulitzer-prize winning biographer
“The idea that eating habits reveal aspects of character is ever-intriguing, and it’s presented here with charm and insight.”—Mimi Sheraton, former restaurant critic for the New York Times and author of 1000 Foods to Eat Before You Die

“Laura Shapiro has done it again! She’s given us a fascinating and wonderfully entertaining history of six women of the last two centuries you might never have thought of as foodies, yet here they are, distinguished by how differently they dealt with the overwhelming importance of food in their lives.”—Marion Nestle, author of Soda Politics
***********

ABOUT WHAT SHE ATE:
Food stories can be as intimate and revealing as stories of love, work, or coming-of-age. Yet most biographers pay little attention to food, as if these great and notable figures never daydreamed about what they wanted to have for dinner or worried about what to serve their guests. Once we consider how somebody relates to food, we find a host of different and provocative ways to understand them. Everyone eats, and food touches on every aspect of our lives—social and cultural, personal and political.
This summer, Viking will publish WHAT SHE ATE: Six Remarkable Women and the Food That Tells Their Stories (Viking; On-sale: July 25, 2017; $27.00; ISBN: 9780525427643) by James Beard Award-winning writer Laura Shapiro, a unique account of the lives of six women from a perspective often ignored by biographers. Each woman in this entertaining group portrait was famous in her time, but until now, no one has explored their lives from the view of the kitchen and the table.
Laura Shapiro examines a lively and surprising array of women and how the theme that unites them is a powerful relationship with food:
Accompanied by black and white photos, WHAT SHE ATE is a unique biography of women who continue to make their mark on present society.
*********** 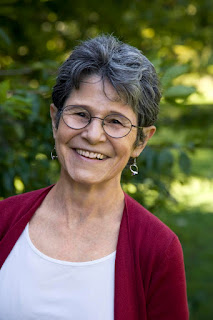 Laura Shapiro has written on every food topic from champagne to Jell-O for The New York Times, The New Yorker, The Atlantic, Slate, Gourmet, and many other publications. She is the author of three classic books of culinary history. Her awards include a James Beard Journalism Award and one from the National Women’s Political Caucus. She has been a fellow at the Dorothy and Lewis B. Cullman Center for Scholars and Writers at the New York Public Library, where she also co-curated the widely acclaimed exhibition Lunch Hour NYC.
***********
GIVEAWAY:
The giveaway copy is “Courtesy of Penguin Random House.”